Home Sport Horner dismisses Jos Verstappen criticism | ‘No 1 driver is the one... 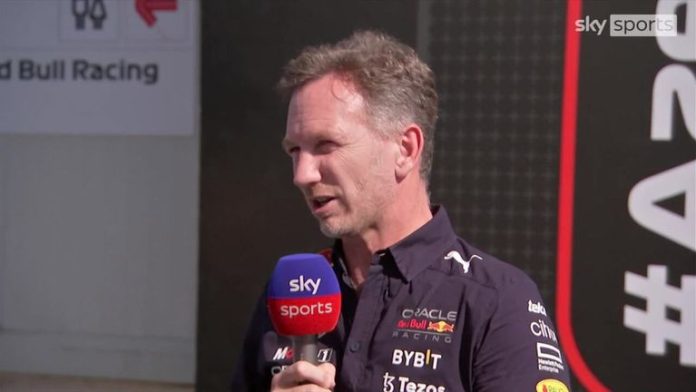 Sergio Perez backed up his Monaco GP victory by outpacing Max Verstappen in both practice sessions at the Azerbaijan GP on Friday; watch the Azerbaijan Grand Prix live on Sky Sports all weekend, with Sunday’s race starting at 12pm

Perez won his first race of the season last time out at the Monaco GP, punctuating a start to the campaign which has seen him compete more closely with Verstappen than he was able to during his first year with the team.

After Perez’s Monaco triumph, Jos Verstappen told Max’s official website that points had been “thrown away” because the team “exerted little influence” in helping his son as the world championship leader.

However, speaking to Sky Sports F1 between first and second practice at the Azerbaijan GP on Friday, Horner stood by the team’s decision and insisted that Perez, who has just signed a two-year contract extension, is on an equal footing with Verstappen.

“What wasn’t apparent was all of the information that we have during a race. If Max had pitted, then he would have come out behind I think George at the time.

“Jos is his own person and personality. He’s got opinions and that’s absolutely fine, that’s his opinion. The reality for us was obviously slightly different… it’s no issue.”

Perez’s victory in Monaco saw the Mexican close to within 15 points of Verstappen in the world championship standings, and within six points of Ferrari’s Charles Leclerc in second.

The small margin between the Red Bull drivers has led to much discussion in the paddock ahead of this weekend’s Azerbaijan GP as to whether Perez is a genuine contender for the title, with his strong performance in Friday practice only intensifying the debate.

Horner insists that if Perez out-qualifies his team-mate – as he did in Monaco – he will get the first call on strategy during the race.

“The No 1 driver is the driver that’s ahead, it’s as simple as that,” Horner said. “That’s why Checo got the call on the pit stop, Max wouldn’t even have had track position for example on that lap.

“But, our fight isn’t between the two drivers, we’ve got a very competitive Ferrari with two fast drivers in it.

“Collectively as a team, we’ve got to take the fight and take the challenge to Ferrari, who are looking very quick this year.”

Perez: Nothing in my contract says I need to finish second

Horner’s comments came after Perez had insisted on Friday morning that his new contract, announced after his Monaco victory, did not include any indication that he holds an inferior status to Verstappen.

“We didn’t discuss that,” Perez said. “There’s nothing in my contract that says that I need to finish second or something like that. It was not a topic at all.”

Asked about his world title chances, Perez added: “I feel like I’ve got a good opportunity. Obviously the season is still very young, so anything can happen from now.”

The 32-year-old also said that being given the new contract, which was agreed before his Monaco win, enables him to focus on racing.

“I certainly feel like as a driver you want certainty,” Perez said. “And you want to get that stress out of the way. So the earlier the better.

“It takes so much energy and so much focus to be 100 percent weekend by weekend, so you don’t need that thinking. So it was good that we agreed so early with the contract.”

After coming through the team’s junior driver programme, Gasly was promoted to a Red Bull seat in 2019, but was dropped from the position half way through the season after failing to impress.

The Frenchman has excelled at AlphaTauri, but with a path back to Red Bull blocked by Verstappen and Perez, Gasly says he will consider leaving the team’s stable when his deal expires at the end of the 2023 season.

“We’re in the fortunate position through the ownership of Red Bull effectively having two Grand Prix teams, that we’ve been able to invest in young talent and bring it up,” Horner said.

“It was obviously a no-brainer for us, and totally deserving for Checo, to retain that seat. For Pierre, obviously he remains under contract to Red Bull and there’s another year to run on that contract, but the timing wasn’t right to bring him back into Red Bull Racing.

“For Yuki, it’s still very early in his career so it was never even a discussion. If shows that we’re not afraid to step out of the scheme, if a driver within the scheme we don’t feel that there’s one ready for Red Bull Racing.

“The pairing that we have, we’re very happy with.”