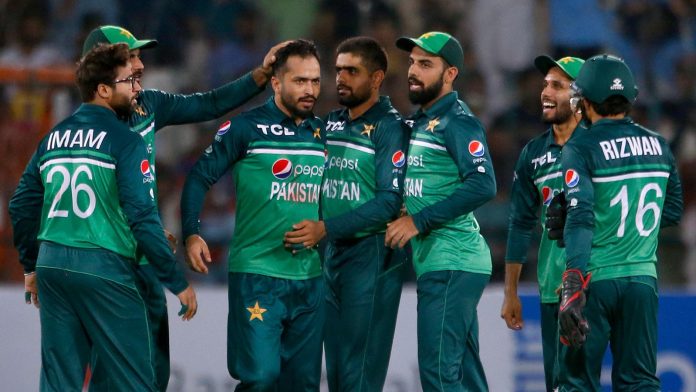 Pakistan’s Mohammad Nawaz recorded career-best figures of 4-18 as the West Indies were skittled for 155 in reply to 275-8 with more than 17 overs to spare; watch the third and final match of the series live on Sky Sports Arena from 11.50am on Sunday

Pakistan claimed an unassailable 2-0 lead over West Indies in their three-match ODI series with an emphatic 120-run victory in Multan.

The hosts followed up their five-wicket victory in the opening match of the series on Wednesday as they made 275-8 before dismissing the tourists for 155.

On a slow wicket where the ball gripped and spun, left-arm spinner Mohammad Nawaz recorded career-best figures of 4-18 as the West Indies were skittled with more than 17 overs to spare.

Babar, who won the toss and chose to bat on another sweltering hot day in Multan, and Imam added 130 runs for the second-wicket stand – their fourth consecutive century partnership in ODIs – after Fakhar Zaman fell cheaply for 17.

Shamarh Brooks top-scored with 42 for West Indies and Kyle Myers added 33 against the pace before Nawaz ran through the top order.

Brooks and Myers batted aggressively against the fast bowlers and added a rapid 67 runs off 54 balls despite Shaheen Shah Afridi (1-17) dismissing first-match century-maker Shai Hope for just four in the first over.

Mohammad Wasim Jr (3-34), replacing Hasan Ali in the Pakistan XI, broke through when he clean bowled Myers before Nawaz had Brandon King bowled off his fourth ball.

Nawaz extracted sharp turn and also accounted for the wickets of Brooks, who was trapped lbw and then had Rovman Powell (10) and skipper Nicholas Pooran’s (25) wickets in one over.

Wasim and Shadab Khan (2-40) then wrapped up the tail quickly to give Pakistan a massive win.

Watch the third and final match of the series live on Sky Sports Arena from 11.50am on Sunday.