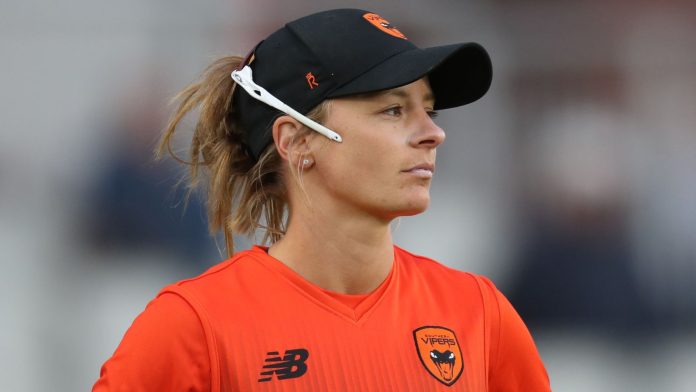 It’s almost time for the Charlotte Edwards Cup final – and what a tournament it has been.

There has been fierce competition and we will see the top three teams in the country battle it out at Finals Day on Saturday.

The eight regions were split into two groups and played each other both home and away. My side, North West Thunder, had Southern Vipers, Loughborough Lightning and Northern Diamonds in our group but sadly we didn’t qualify for the main event.

Vipers stole the show, finishing undefeated. They were unstoppable. They are a very professional and clinical team, oozing with confidence and with strength in depth.

They have England stars in Danni Wyatt, Charlie Dean and Georgia Elwiss as well as breakthrough talents from The Hundred in Maia Bouchier and Lauren Bell.

Personally, I’ve enjoyed seeing Freya Kemp break into their first team as she is a handy left-arm seam bowler.

Stars and Sparks to meet in semi-final

Vipers will meet South East Stars or Central Sparks in the final at 4pm, with Sparks and Stars facing each other in the semi-final at midday.

Stars will be favourites against Sparks – they are the reigning champions and know how to win on Finals Day – but both teams will fancy their chances having beaten each other in the group stage.

Stars are led by the destructive Bryony Smith. She will most likely open the batting with the in-form Aylish Cranstone, who is averaging 78 this tournament with three fifties in six innings.

They also have some incredible depth in their team with England’s Freya Davies and Sophia Dunkley and Hundred stars Dani Gregory, Kalea Moore, and Alice Davidson-Richards.

Sadly, Tash Farrant, the leading wicket-taker in The Hundred last season, will not be available due to recently picking up a stress fracture in her back.

Captain Eve Jones will lead Sparks, while Sarah Glenn and Amy Jones will be eager to beat their England team-mates. I’m also excited to watch my old team-mate Ami Campbell take to the main stage.

Nothing beats the pace the Sparks have up top, and it will be great to see the fierce Emily Arlott and Issy Wong get into competition mode and take the new ball.

Despite not qualifying for Finals Day, it was awesome to be on the pitch with Thunder and competing again.

We saw some magic moments with the ball, too.

It was enjoyable being on the right side of the derby game!

Suspected meteor caught on camera streaking across the sky over Utah