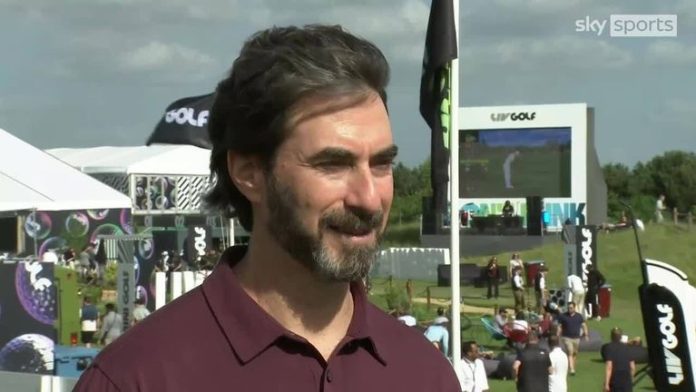 Former Masters champion Schwartzel, who led after Thursday’s opening round, produced another dazzling round to stay top of the leaderboard by three strokes from Du Plessis.

The 37-year-old carded a four-under 66 in breezy conditions in St Albans to stand at nine under with Saturday’s third and final round to come.

Du Plessis, who is on the same four-man team as Schwartzel, shot a 68 to stay firmly in the hunt.

Oliver Bekker made it three South Africans in the top four as he put together a round of 67 to reach three under.

American Peter Uihlein birdied his last hole for a best-of-the-day 66 to move to within five shots of Schwartzel.

After Thursday’s launch was overshadowed by news that the PGA Tour had suspended those taking part in the Saudi-funded breakaway circuit, there was a decent crowd at the course to watch the 48-strong field chase the biggest prize in golf history on Friday, air shows and live music adding to the entertainment.

Mickelson, playing his first tournament since February after taking time away from the game in the wake of comments he originally made about the LIV Series, struggled with his putter in a round of five-over 75 to leave him on four over for the tournament.

Johnson fared better, an even-par round leaving him at one-under heading into Saturday.

The LIV Invitational Series, which offers $25m in prize money at each of the eight events, attracted another big name on Friday as American big-hitter Bryson DeChambeau became the latest player to officially jump on the bandwagon.

The events feature a 54-hole format with no cuts and a shotgun start where each group of three begins on a different hole. As well as the individual stroke play competition, 12 teams of four, chosen by captains at a pre-event draft and boasting names such as Stingers and Fireballs, compete for a team prize pot of $5m.

Schwartzel’s Stinger team are out in front on a combined 15 under, seven better than Uillein’s Crushers