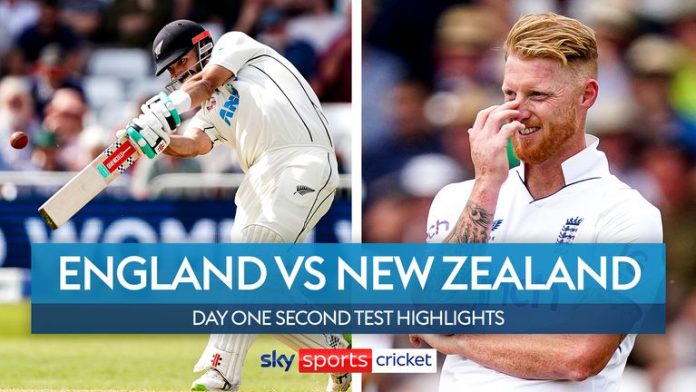 Simon Doull: “New Zealand need Williamson’s runs more than they need his captaincy at the moment, and they’ve got a wonderful replacement in Latham”; watch day two of the second Test from 10.15am, Saturday, Sky Sports Cricket

Kane Williamson made headlines on the eve of the second Test between England and New Zealand at Trent Bridge as the Black Caps captain was ruled out with Covid.

Tom Latham has stepped up to skipper the side in Williamson’s absence, with New Zealand impressive on the opening day of the Test as they put a sloppy England side to the sword.

Ahead of play, former New Zealand bowler Simon Doull posed the question whether the move might become a permanent one after the series, with Williamson struggling for form with the bat of late.

Asked of Latham’s credentials, Doull told Sky Sports: “He’s a terrific captain; I think he understands and reads the game really well, and he is comfortable within his own game at the top of the order.

“If Kane Williamson is fit for the last Test match and captains New Zealand, might it be for the last time in Test cricket?

“I just think it’s almost time for Latham to take over this Test side.”

Williamson is currently fifth in the ICC Test batting rankings, while he is also one of the dubbed ‘Big Four’ – along with Virat Kohli, Joe Root and Steve Smith – who are considered the world’s best.

Williamson averages 52.81 in Test cricket, and that improves to 58.07 in his 39 Tests as captain since 2016, but the 31-year-old is currently enduring a barren run with the bat, coming into this series off the back of a nightmare IPL stint in which he averaged 19.63 and scored only one fifty in his 13 matches.

“I just want Kane to be the best batter New Zealand has ever had,” Doull added.

“Captaincy in the white-ball format I still see with him moving forward, but I see Latham as our future Test captain – which will relieve some of the pressure on Williamson.”

While Williamson scored a total of 17 runs in New Zealand’s first Test defeat to England at Lord’s, Root – in his first Test since stepping down as Test captain in April – struck a magnificent, unbeaten 115 to see the hosts to a memorable five-wicket win.

Speaking to Sky Sports after the match, Root revealed that the captaincy had begun to have an “unhealthy effect” on him, and Doull doesn’t want the same to happen to Williamson.

“New Zealand need Williamson’s runs, more than they need his captaincy at the moment, and they’ve got a wonderful replacement in Latham.

“I just feel that this might be the future going forward in Test cricket for New Zealand.”

Watch day two of the second LV= Insurance Test between England and New Zealand, at Trent Bridge, live on Sky Sports Cricket from 10.15am on Saturday.