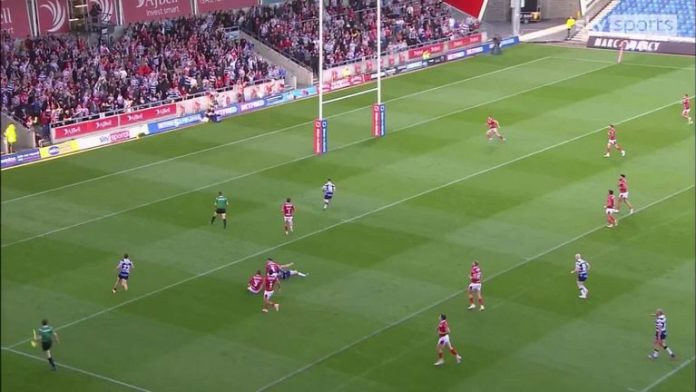 The Warriors held a narrow lead at half-time with Harry Smith scoring the only try in a half that lacked quality; however, Wigan upped their game in the second half and managed to cross for five tries in 20 minutes, before Salford stirred late on; Warriors now second in table

Bevan French ran in a second-half hat-trick as Wigan won 30-12 at Salford to climb to second place in the Betfred Super League.

The Warriors held a narrow lead at half-time with Harry Smith scoring the only try in a half that did not lack intensity but did lack quality.

However, Wigan upped their game in the second half and managed to cross for five tries in 20 minutes, before Salford stirred late on.

The visitors opened the scoring against the run of play, capitalising on a Salford error and eventually getting the ball to Liam Marshall. The winger then stepped inside and sent Smith over – and the half-back converted his own try.

Brodie Croft, Ryan Brierley and Marc Sneyd were showing glimpses of class for the hosts but were finding it difficult to break down a very solid Wigan defence.

Salford’s best chance came following an initial poor kick on the fifth, the ball ended up with Joe Burgess and he sent his own kick through but was unable to ground the ball.

Liam Farrell almost celebrated his new three-year deal with Wigan with a try. He somehow found a gap and outpaced the Red Devils defence before Burgess and Brierley got back to bring him down.

Wigan benefited from a penalty deep in their own half which saw them travel the length of the field to extend their lead to 10-0 five minutes after the break.

They attacked on their left once again and Jake Bibby put in a delicate kick, with Marshall on hand to expertly pick up the ball before it rolled into touch and score in the corner. Smith was unable to convert.

Wigan looked like they were going to record back-to-back tries when Thomas Leuluai intercepted on his own line and set off on a run. He sent Jai Field on a break of his own and he found French in space but Kallum Watkins put in a huge hit that saw the winger drop the ball.

Minutes later Field and French exchanged passes before the latter touched down in the corner. Smith added the extras and the visitors looked comfortable at 16-0.

Salford were becoming their own worst enemy. After forcing a drop out following a great break from Tyler Dupree, they dropped the ball on the first tackle to let Wigan off the hook.

The game was ended as a contest in the 57th minute when Willie Isa found French in space on the right and he went over for his second try.

The visitors looked like scoring on every attack and Marshall grabbed his second try as French and Isa combined to send the winger over. French then grabbed his hat-trick after he collected a grubber from Marshall.

Salford added some respectability to the scoreline with two late tries. After Deon Cross grounded a Croft kick-through, Watkins did the same.

What the coaches said…

Wigan coach Matt Peet: “There is a lot of people who contributed to that performance. I thought Ethan Havard’s performance was outstanding if you want to look at someone who turned the game around.

“You all know that the forwards decide who wins and the backs decide by how many. Credit to our middle unit, both are back rowers were relentless. You always have to look at the middle of the field first, and if you win that battle, the other players who are exceptional talents get to show what they can do.”

“I thought we weren’t clinical with the ball in hand. It not usual to talk about our side not being clinical, we are normally pretty good. We were off. We tried to thread a needle instead of being a bit more direct.”

Salford are at home again with Wakefield Trinity the visitors on Sunday, June 26 (3pm kick-off), while Wigan will host Toulouse on Friday June 24 (8pm kick-off).