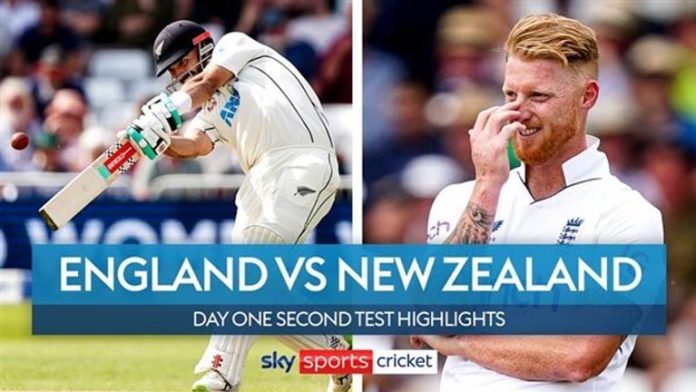 England drop three chances during first day’s play at Trent Bridge; Daryl Mitchell, who was put down on three by Joe Root, finishes day one unbeaten on 81 – watch day two of the second Test from 10.15am, Saturday, Sky Sports Cricket

England put down three catches, while Daryl Mitchell and Tom Blundell shared an unbroken 149-run stand to see New Zealand on top at 318-4 after day one of the second LV= Insurance Test at Trent Bridge.

Mitchell (81no) and Blundell (67no), who shared a 195-run partnership last week at Lord’s, were again the scourge of England after the hosts had seemingly eked out an opening when the ball began to talk in the afternoon session.

Having toiled away on a largely batter-friendly surface, Ben Stokes (2-40) and James Anderson (2-42) suddenly found some swing prior to tea, claiming the wickets of Henry Nicholls (30) and Devon Conway (46) in quick succession to reduce the Black Caps to 169-4.

It was the second time in the day Stokes and Anderson had formed a lethal pairing as they’d earlier dismissed the New Zealand openers with back-to-back deliveries after Will Young (47) and stand-in skipper Tom Latham (26) – covering for Kane Williamson, ruled out with Covid – had got the visitors off to a rollicking start with an 84-run stand.

England made to pay for dropped chances

England were guilty of being a little profligate with the ball, giving up 43 boundaries in the day’s play, including 20 in the opening session, while in the field three catches were put down in the slips – Zak Crawley dropping Nicholls on 17 and Joe Root responsible for two, Mitchell most crucially on 17 and Blundell a much tougher take when on 47.

Mitchell, in particular, made England pay for the error in the evening as the pitch deadened and the ball lost any zip that was evident before the interval – perhaps partly down to one of the New Zealand batsman’s two sixes landing in the pint of one unfortunate spectator sat beyond the long-on boundary.

Did Stokes make the wrong call at the toss?

The subsequent events of the day’s play point to it being a straightforward decision at the toss, but Stokes’ call to bowl was more than an understandable one given the green tinge present on the pitch, with Latham too saying he would have bowled.

The pitch had good pace and carry but, with the sun beating down in Nottingham, that proved to be of greater assistance to the New Zealand openers than England’s seamers, who were guilty of not quite hitting the right lengths as they had done so impressively at Lord’s.

Barring a couple of close shaves in their running between the wickets, it looked like Young and Latham would breeze through the opening session unscathed, only for Stokes – the pick of the England bowlers – to make something happen, as is so often his way.

Stokes, with the ball angled into the right-handed Young, got one to just hold its line and take the edge through to second slip where Crawley claimed a superb catch low to his left. A ball later, Anderson swiftly brought back into the attack, it was two in two as Latham succeeded in swatting nothing more than a harmless loosener straight to Matthew Potts at short midwicket.

No magic touch for Broad at Trent Bridge

There would be no team hat-trick this time, though Stuart Broad (0-74), whose inspired over on that third morning at Lord’s set England on course to victory, again tried to rev up the crowd in similar style shortly after lunch.

Broad bowled well but without reward, though he should have at least claimed the wicket of Nicholls, only for a perhaps overly-confident Crawley, following his earlier exploits, to dive in front of Root and see the chance slip from the grasp of his outstretched right hand.

Then, just as New Zealand were again beginning to get on top in the contest – Conway and Nicholls bringing up a fifty partnership in just 60 balls – England suddenly got the ball swinging from the 35-over mark to unsettle the batsmen.

Conway nearly perished in the same manner as Latham, seemingly clipping one straight short midwicket but, after being referred to third man by the umpires, the ball was shown to not quite carry through to Potts this time.

He and Nicholls were soon back in the pavilion, however, with the latter the first to go, unable to a resist a little nibble at one from Stokes from round the wicket, while Conway’s nick behind came off the inside edge.

England had an opening, with two new batters at the crease, but Root put down a regulation chance at slip off Stokes and Mitchell, along with Blundell, battled through to tea before conditions again moved in the visitors’ favour.

Mitchell took a liking to Jack Leach (0-62) early on in the final session, reverse-sweeping the spinner for four in the second over of his spell, before starting his third by smacking four over mid-off and then striking six straighter.

Blundell survived a strong lbw shout from Jack Leach when on 39 – England reviewing and the ball shown to be clipping leg stump on ‘umpire’s call’ – while Root coughed up his second of the day, a lightning-quick ‘chance’ from a flashed edge off Leach, shortly before Blundell joined Mitchell through to 50.

Broad tried some short-pitched stuff for an increasingly desperate England in the hope of disturbing the batsman while, just to add to his and the home side’s frustration, in the third over with the second new ball shortly before stumps, a Blundell edge on 63 went unclaimed as it split Crawley and Jonny Bairstow at a catchable height between second and third slip.

1 – New Zealand have only ever won one Test series coming from behind. That was the 1999 series in England when they lost the first Test but won the second and fourth to take the series 2-1.

2 – there have only been two draws in the last 15 Tests at Trent Bridge, dating back to 2003. They were the 2014 Test against India in which James Anderson scored 81, and last year when the final day was washed out with India 52-1, needing a total of 209 to win.

100 – runs scored before lunch. It was the first time 100 runs have been notched before lunch in a Test held in the UK since England’s Test against the West Indies at Edgbaston in 2017

Hussain: ‘Days like this will make English cricket better’

Sky Sports Cricket’s Nasser Hussain said: “If days like this don’t break you, they will make you stronger. This is Test match cricket, it is hard work. These sorts of days will make English cricket better in the future.

“Jack Leach got a longer bowl [getting through 18 overs]. We found out about Matthew Potts – and will now find out on Saturday morning whether he can go again physically.”

England bowling coach Jon Lewis: “The most important thing about the decision at the toss is that it was the aggressive play. We were coming out to bowl New Zealand out. Unfortunately, we missed a couple of chances but that’s cricket.

“You can always bowl a slightly different length but we are choosing, at the moment, to take the aggressive option and be courageous in what we do. I liked the areas the guys bowled. We could have easily bowled them out for 250 and be sat now in a very different position.”

New Zealand’s Devon Conway: “We set about trying to be more aggressive and have that positive mindset with intent to score. That was something we lacked at times in the first Test but we are reaping those rewards after day one here.

“The pitch looked a bit green on top this morning so we would have probably bowled first but it was not thinking too much about the surface. England bowled quite full and asked questions of us, but that provided us with scoring opportunities.”

Watch day two of the second LV= Insurance Test between England and New Zealand, at Trent Bridge, live on Sky Sports Cricket from 10.15am on Saturday.