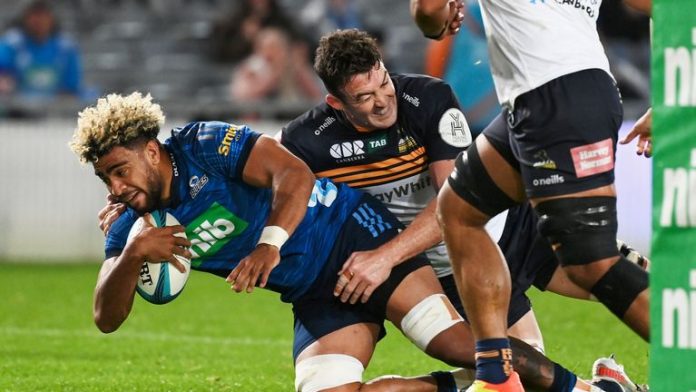 The Blues will face the Crusaders in the Super Rugby Pacific final at Eden Park on June 18, live on Sky Sports; Hoskins Sotutu and Mark Telea crossed for first-half tries against the Brumbies, who rallied in the second half to set up a tense finish

The Blues held off a late surge from the Brumbies to win an Eden Park thriller 20-19 on Saturday and set up an all-New Zealand Super Rugby Pacific final against the Crusaders at the same ground next week.

The Blues had a 20-7 lead at half-time but were held scoreless after the break as the Brumbies grabbed two tries off lineout drives to cut the deficit to a single point with three minutes to play.

Brumbies fly-half Noah Lolesio had a drop-goal charged down by prop Ofa Tuungafasi as the final few seconds ticked away and the Blues survived for a 15th successive victory and a spot in the title decider.

“They are a quality outfit the Brumbies. We knew they would go to the full 80 and they didn’t disappoint,” said Blues skipper Beauden Barrett.

“We’re excited to be back here next week. We’ve given ourselves a chance and that’s all we can ask for.”

The Brumbies, looking to become the first Australian side to win a play-off in New Zealand in the 26 years of Super Rugby, made the perfect start in the third minute when Irae Simone ran straight through the defensive line for a converted try.

Blues full-back Stephen Perofeta hit back with a penalty in the 10th minute but the Brumbies were soon back on the attack and rolled a maul to within inches of another try.

Surge after surge failed to get the ball over the line and when the Brumbies were held up, fly-half Barrett’s goal-line drop-out targeted injured flanker Tom Hooper, who knocked on.

Another penalty after 20 minutes cut the deficit to 7-6 and the Blues were soon ahead with No 8 Hoskins Sotutu touching down after a move featuring some sensational running from Perofeta, Rieko Ioane and Barrett.

Winger Mark Telea crossed 11 minutes later after another irresistible display of power running and the Blues went into the break with a comfortable 20-7 lead and the job apparently half done.

The Brumbies came out firing in the second half, however, and gained a man advantage in the 54th minute when Blues hooker Kurt Eklund was shown a yellow card for a tip tackle.

Barrett and Perofeta held up Brumbies attackers over the line before replacement hooker Lachlan Lonergan finally got the ball onto the ground from a trademark Brumbies rolling maul just before the hour mark.

Lolesio missed the conversion but, after Blues flanker Adrian Choat had been sent to the sin-bin for a dangerous tackle, Lonergan crashed over from another catch-and-drive to set up the late drama.

“We showed a lot of heart in the second half, gave ourselves an opportunity to win this game but just didn’t ice it there in the end,” said Brumbies captain Allan Alaalatoa.

The Crusaders, 10-times champions of the old Super Rugby competition, marched into the final with a 20-7 win over the Chiefs in Friday’s first semi-final.