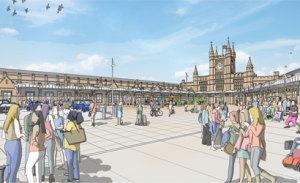 Thousands of new homes and jobs will be created through the regeneration of Bristol Temple Quarter, thanks to £95m in government funding, Levelling Up Minister Neil O’Brien MP has announced.

Bristol’s biggest ever regeneration project will deliver up to 10,000 homes and 22,000 jobs in a series of new sustainable and inclusive communities at the heart of one of the UK’s most productive and fast-growing city regions. The funding will unlock the first phase of this scheme, with future plans to develop 57 hectares of land across St Philip’s Marsh in phase two.

The partnership between the West of England Combined Authority, Bristol City Council, Network Rail and Homes England will bring forward the regeneration of approximately 130 hectares – equivalent to about 182 football pitches – of brownfield land.

The £95m funding will be focused on areas immediately around Bristol Temple Meads station, unlocking approximately 2,500 new homes by 2032 and supporting around 2,200 jobs.

The funding will also support the creation of three new or significantly improved station entrances planned to the north, south and east of Bristol Temple Meads station. The new entrances will mean that the station no longer severs the connections between neighbouring areas but connects them instead. The new eastern entrance to Bristol Temple Meads will make it much easier to reach the station from surrounding neighbourhoods and creates a link to the new University of Bristol Temple Quarter Enterprise campus.

There will also be a multi-storey car park and a new transport hub which will link up the railway with connections for pedestrians, cyclists and the local and citywide bus network, making it easier to travel around the city and to/from the region.

This latest funding announcement builds on the completion of last summer’s £132m track and signalling upgrade at Bristol East Junction and the ongoing renovation of the station’s historic train shed roof.

Mike Gallop, Network Rail’s Western route and strategic operations director, said: “We welcome this funding announcement and look forward to continuing working with our partners to revitalise Bristol Temple Quarter, including transforming Bristol Temple Meads station into a world class transport hub with three new entrances, a multi-storey car park and new commercial and retail for the benefit of our passengers, the city of Bristol and wider West of England region.

“Our work to modernise the railway near Bristol Temple Meads and the renovation of the station itself is continuing to progress really well. Last summer we completed a £132m major track upgrade at Bristol East Junction resulting in a clever new track layout and state of the art signalling equipment, providing passengers with more reliable and better journeys to and from Bristol Temple Meads, while the next phase of our work to refurbish the station’s historic train shed roof is ongoing.”

Levelling Up Minister, Neil O’Brien MP, said: “Building new homes in the places they are most needed and regenerating our towns and cities lies at the heart of the Government’s levelling up mission.

“It’s fantastic to be in Bristol today to see this levelling up in action; central government working with local leaders and industry to grow the economy, delivering the high-quality new homes this country needs and breathing new life into neglected places.”

Peter Denton, Chief Executive of Homes England, said: “The Temple Quarter programme provides a step change in how regeneration can be delivered, with the public partnership steering the regeneration, inviting further investment and partnerships with world class regeneration partners.

“We are committed to working with ambitious local authorities seeking to meet their local housing needs through delivery of key infrastructure. The multimillion-pound government funding will resolve much needed improvements to the infrastructure surrounding the station, unlocking critical housing sites and allowing the partnership between the Combined Authority, Bristol City Council, Network Rail and Homes England to deliver their vision for the local community and develop a sense of place.”

The West of England Metro Mayor, Dan Norris, said: “I’m thrilled that the Combined Authority, that I lead, has been awarded £95m to invest in Temple Quarter one of the most exciting regeneration projects in Europe. Now we need to make sure that the buildings and infrastructure and the high skilled jobs we bring in, truly match our ambitions on tackling the climate emergency and use the skills of our amazingly talented workers to make this area something to be very proud of.

“Combine this with the refurbishment of Brunel’s iconic station and we really will have, at long last, the jewel in the crown in the heart of our great city and fantastic region.”

The Mayor of Bristol, Marvin Rees, said: “Temple Quarter creates the opportunity to make our city more sustainable and better connected, while providing the affordable homes, accessible jobs and training that our citizens want and need as we tackle the climate and ecological challenges.

“This announcement is extremely welcome and is the result of a productive partnership between Bristol City Council, the West of England Combined Authority, Network Rail and Homes England that first met in 2017 to plan for the successful regeneration at the heart of the city region.

“The partnership has brought forward a realistic, integrated vision to create a thriving new area of the city that will be key to Bristol’s and the city region’s journey to becoming an inclusive and sustainable economy, boosting Bristol’s role as a major driver of the city region and Western Gateway economies. This funding will unlock the infrastructure and public spaces needed to support further delivery on homes, jobs and inclusive growth and will underpin Bristol’s connectivity, sustainability and path to carbon neutrality.”