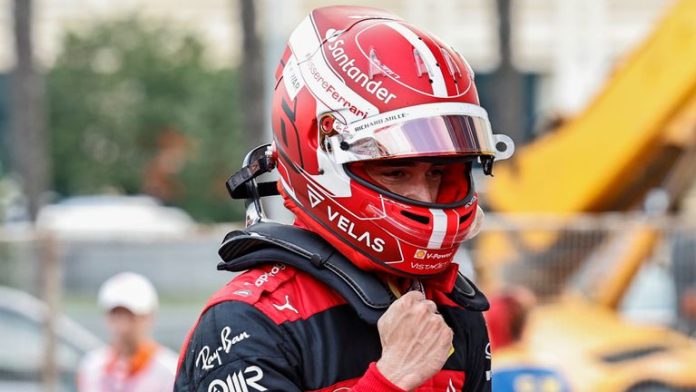 Charles Leclerc produced a stunning lap to beat Sergio Perez to pole at the Azerbaijan GP as Ferrari and Red Bull contested a thrilling qualifying session in Baku.

A dramatic session, which saw a red flag after a Lance Stroll crash in Q1, came down to the final moments as the top four all appeared to have a chance of pole going into their final runs.

But it was Leclerc, as he has done on several occasions this season, who was able to produce when it mattered most, sealing his sixth pole in eight races this campaign with a 1:41.359.

Carlos Sainz, who went into the final round of flying laps at the top of the timesheet, was fourth for Ferrari, with the second Ferrari almost a full second clear of the Mercedes of George Russell in fifth.

Russell once more outperformed his team-mate Lewis Hamilton, who finished seventh after being forced to scrap his way through the first two segments of qualifying.

The seven-time world champion’s position was confirmed after the session as he was cleared of driving “unnecessarily slowly” and holding up both McLarens in the closing stages of Q2.

Pierre Gasly was between the Mercedes for Alpha Tauri in sixth, with his team-mate Yuki Tsunoda behind Hamilton in eighth.

Sebastian Vettel joined his Aston Martin team-mate Lance Stroll in making significant contact with a barrie in Q2, but was fortunate not to sustain major damage and recovered to finish ninth, with Fernando Alonso rounding out the top 10 for Alpine.

A cracker of an Azerbaijan GP is in store, with Red Bull confident their race pace will enable them to challenge Leclerc for victory. The race is live on Sky Sports F1 at 12pm, with build-up from 10.30am.

Leclerc has repeatedly outperformed his team-mate Sainz – and the Red Bulls – in qualifying this season, but the Spaniard appeared to be a genuine threat for pole as he was the faster Ferrari in both Q2 and the first run of Q3.

With the top four covered by less than 0.2s after that first Q3 run, it was anyone’s pole going into the final seconds, but Leclerc found the most improvement to secure a fourth successive start at the front of the grid.

He was almost 0.3s clear of Perez, who edged team-mate Verstappen to second by less than a tenth, with Sainz a further tenth behind.

“Obviously all pole positions feel good,” Leclerc said. “But this one I didn’t expect it because, especially in Q1 and Q2, I really struggled to see that we were faster but it came together in the last lap and I managed to do a good lap, so I am extremely happy.”

Despite his run of poles, Leclerc is seeking to end a run of four races without a win, which has enabled Verstappen to establish a nine-point lead over him at the top of the standings.

With Perez having closed to within 15 points of Verstappen by winning in Monaco, the battle between the Red Bulls promises to be a fascinating subplot in Sunday’s race.

It required a special shootout to match the drama seen at the end of Q1, when the red flag caused by Stroll’s crash left the session to resume with just 2:30 on the clock.

All but six of the 20 cars went out on track, and the ones at the back of the long queue that had formed in the pit lane only just made it round in time to start flying laps.

There were accusations of foul play from Williams’ Alex Albon, who claimed Fernando Alonso intentionally slowed down those behind him on their flying lap, but his complaints were in vain as he exited alongside team-mate Nicholas Latifi, Mick Schumacher, Kevin Magnussen and Stroll.

Having momentarily appeared under threat in Q1, Hamilton needed a tow from team-mate Russell at the end of Q2 to ensure his place in the shootout, but came under investigation for going too slowly as he tried to secure the correct track position.

However, he was deemed to have given the McLarens of Lando Norris and Daniel Ricciardo, who both subsequently exited in Q2, the opportunity to pass him and was cleared of any wrongdoing.

That provided a welcome break for Hamilton as his inability to keep pace with Russell was once more evident in Q3, when the younger Brit was able to find 0.2s on his team-mate to ensure his regular spot as the ‘best of the rest’ this season.

Mercedes boss Toto Wolff admitted after the session he is finding it challenging to comprehend the gap between his cars and the teams they had expected to rival for the world championship this season.

“It’s a long lap time and we’re lacking pretty much everywhere,” Wolff said. “I wish I didn’t have to look at these kind of overlays in the future, any more.”

‘It’s why we’re on the brink of extinction’: Crackdown urged on...

‘You disgraced your families when you did this’: Mother of US...