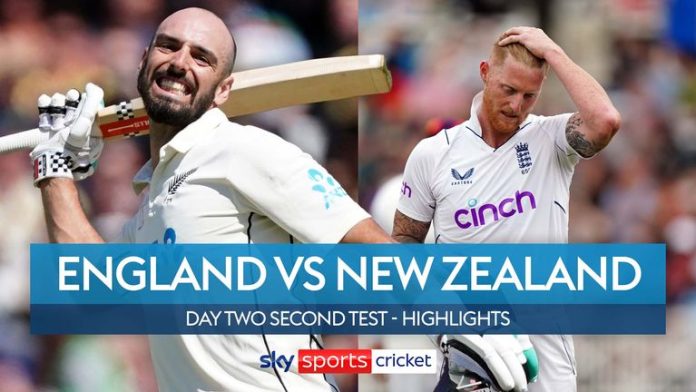 Daryl Mitchell (190) propels New Zealand to their record score in England of 553, but he then drops Alex Lees on 12 and Ollie Pope on 37 at slip as the pair share in unbroken 84-run stand – watch day three of the second Test from 10.15am, Sunday, Sky Sports Cricket

England were again made to toil in the field before a mini fightback with the bat saw them close day two on 90-1 in reply to New Zealand’s first-innings 553 in the second LV= Insurance Test at Trent Bridge.

Daryl Mitchell (190) brought up back-to-back hundreds early in proceedings before becoming the last batsman to fall – 10 short of a maiden Test double-ton – as New Zealand posted their record-highest score in England.

But Mitchell turned villain somewhat late in the day when, after the tourists had picked up Zak Crawley (4) cheaply, he dropped Alex Lees when on 12 and Ollie Pope on 37 at first slip.

On a flat pitch that has offered little to the bowlers over the first two days, such errors are hugely costly, as England can attest to after missing five such chances during their 145.3 overs in the dirt (four drops, plus the edge which divided Crawley and Jonny Bairstow in the slips late on day one).

Pope (51no) brought up a seventh Test fifty, off just 66 balls, shortly before stumps, while Lees is 34 not out – the pair to resume their unbroken 84-run stand on the third morning.

Earlier, Tom Blundell (106) managed what he couldn’t quite at Lord’s last week, joining Mitchell through to three figures as the pair progressed their overnight partnership to 236, Blundell passing 1,000 Test runs in the process.

Mitchell should have perished for 104 when looking to launch Jack Leach into the stands like he had done the day before, but England took their tally of drops for the innings to four as Matthew Potts grabbed only thin air when running round from the long-on fence.

It wasn’t until the 23rd over of the day when England finally broke the stand, Blundell this time looking to take on the spinner but succeeding only in picking out Ben Stokes at mid-off.

Michael Bracewell looked accomplished on debut, striking nine boundaries all round the wicket either side of lunch, while Mitchell too went back on the offensive, clubbing Leach into the stands twice more as he moved his score beyond 150.

An unexpected rain delay disrupted New Zealand’s momentum and the scoring dried up when play resumed after an early tea was taken; Potts banged the ball in short from one end, while Jimmy Anderson (3-62) plugged away on a disciplined line outside off, for which he was eventually rewarded as Bracewell (49) fell one shy of fifty – Joe Root gratefully clinging on at first slip.

The wicket prompted a sudden flurry; Stuart Broad (2-107) struck twice in an over – Kyle Jamieson (14) gloving behind to Ben Foakes and Tim Southee (4) fending a shoulder edge to gully – while Leach (2-140) added Matt Henry first ball as he tamely lobbed one up to Crawley at extra cover.

Trent Boult, tasked with shepherding Mitchell through to a maiden double-hundred, went about things in his own unique way, smashing four boundaries in his 18-ball 16 – a score which moved him level with Muttiah Muralitharan for the most runs by a No 11 in Test history, prompting a fair few smirks in the visiting dressing room.

But, ultimately, it would be Boult who would run out of partners and left stranded short of his milestone, as Mitchell got a thin edge through to Foakes when looking to fetch a wide slower ball from Potts (1-126) to end the innings.

With a possible 29 overs still to be bowled, it looked like England’s day was about to get worse when, to end the second of those, Crawley nicked off to a ripper from Boult (1-18).

Lees, looking to be positive like in his last innings at Lord’s – one which prompted skipper Stokes to say his 20 was his best knock yet in an England shirt – got off the mark with a drive down the ground for two, while the same shot brought him a first boundary in Southee’s next over.

The approach was not without its risks, however, as Lees nearly dragged another attempted drive off Southee onto his stumps and then edged the Kiwi quick to Mitchell later in his spell, only for the chance – similar to the one he himself served up to Root when on only three – to go begging.

Pope looked a little more assured at the crease, clipping four off his pads square to get off the mark and then sweetly timing two drives through the covers off the same Henry over, either side of a top-edged pull for six to bring up England’s 50.

Pope pulled Henry for six more in his next over – this one struck slightly more out of the middle – but then he too suffered a scare as he nicked Boult through to Mitchell at slip, who this time put down a tougher take low to his left.

Pope struck a couple more boundaries before stumps to go through to his half-century, much to the pleasure of the home crowd who increasingly found their voice in the evening session.

553 – the third-highest team score against England after being put in to bat. The only two higher totals were both scored by Australia – 601 scored at both the Gabba in 1954 and Headingley in 1989.

236 – New Zealand’s new record partnership for their fifth wicket, set by Mitchell and Blundell in this Test, surpassing Nathan Astle and Craig McMillan’s 222 against Zimbabwe at Wellington in 2000.

150 – Only four New Zealand pairs have had successive partnerships of over 150 in Test cricket, with Mitchell and Blundell the latest to do so in this series.

23 – England’s opening partnership since the start of last year averages just 23 runs – no side to play more than four Tests in that time has a worse record.

Pope drives like ‘Ian Bell at his very best’

Former England spinner Graeme Swann said: “Pope looked jittery at the start of his innings but he has gone on to get a good fifty and played great after the dropped catch. There were two cover drives that were just sublime, like Ian Bell at his very best. He has got to turn up tomorrow and think this is a golden opportunity, on a flat pitch, to get a hundred.

“Lees is the sort the opener England have been looking for. No frills, feet in the right place. As an opener you don’t have to look good but you have to look solid.”

England batting coach Marcus Trescothick said: “It was a nice finish to the evening, but it’s just the start of some hard work. I’m fairly happy with where we are but there’s a bit to do.

“We’ve seen both of these guys play well in county games and have some success here and there in international cricket, but this is a great of opportunity for them to get a big score.

“What we know is it takes a lot of hard work and discipline. There are still good balls being bowled out there, as we saw with Zak’s dismissal, so we’ve got to be patient and do the right things.”

Watch day three of the second LV= Insurance Test between England and New Zealand, at Trent Bridge, live on Sky Sports Cricket from 10.15am on Sunday.