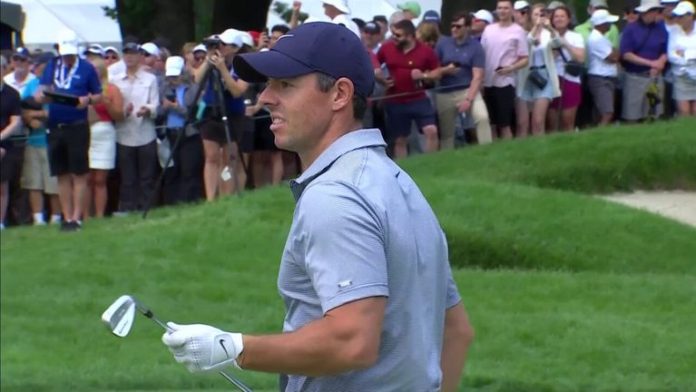 McIlroy sits on 11 under alongside Finau as he chases a first PGA Tour victory since his CJ Cup success last October; Watch the final round live on Sunday from 3pm via the red button and Sky Sports Golf YouTube channel, ahead of full coverage from 5pm

Rory McIlroy bolstered his hopes of a successful RBC Canadian Open title defence after taking a share of lead into the final day in Ontario.

The 20-time PGA Tour winner, who stormed to a seven-shot victory in the 2019 contest before the last two editions were cancelled due to Covid-19, mixed six birdies with a lone bogey on his way to a third-round 65 at St George’s Golf Club.

McIlroy is tied on 11 under with Tony Finau, who charged up the leaderboard after briefly threatening a ’59 round’ on his way to a round-of-the-day 62, while reigning PGA champion Justin Thomas is two back in tied-third with Sam Burns, Alex Smalley and overnight leader Wyndham Clark.

“I played really well,” McIlroy told Sky Sports. “A tinge of frustration that I didn’t hole the putt at the last, but overall I played great. I drove the ball well, hit some better wedge shots today and holed a few putts. All aspects of the game were feeling good and I just need to take that into tomorrow.”

McIlroy holed a 20-footer at the fourth and rolled in from 35 feet for another birdie at the par-five seventh, before cancelling out a bogey at the par-three next to make a two-putt gain at the par-five ninth and reach the turn in 32.

The former world No 1 responded to a missed five-foot birdie chance at the tenth by taking advantage of the par-five next and firing his approach into the par-four 12th to tap-in range, with a birdie at the par-five 15th lifting him into a share of the lead.

McIlroy had a glorious opportunity to grab the solo advantage when he struck his approach at the par-four last to within six feet of the flag, only to miss the birdie putt and leave him alongside Finau on 11 under.

Finau had birdied two of his opening six holes before making a 20-foot birdie at the eighth, before following an eagle from double the distance at the next by starting his back nine with successive birdies.

The American’s hopes of a sub-60 score were halted when he failed to get up and down from a greenside bunker to save par at the 12th, although he holed from off the green at the 14th and drained a 25-footer at the last to book a final-round showdown with McIlroy.

Thomas almost holed out for albatross at the par-five 14th on his way to a bogey-free 63, lifting him to nine under, with Homa also within two of the lead as he chases a fourth PGA Tour victory of the season.

English trio Justin Rose, Aaron Rai and Matt Wallace are all in the group on four under, with world No 1 Scottie Scheffler a further stroke back after slipping out of contention with a one-over 71.