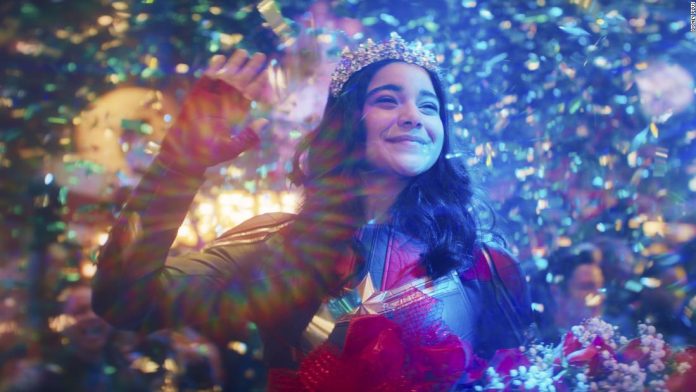 A version of this story appeared in Pop Life Chronicles, CNN’s weekly entertainment newsletter. To get it in your inbox, sign up for free here.
For mine, I’d like to be able to turn water into gasoline. (I can buy my own wine.)
Speaking of superpowers, let’s get this week’s newsletter started.

‘Ms. Marvel’
Score this one a win for both the Marvel universe and diversity.
“Ms. Marvel” stars newcomer Iman Vellani as teenage Muslim superhero Kamala Khan, a New Jersey high schooler who admires the likes of Captain Marvel and — spoiler alert — gets to become a crime fighter herself.
The 19-year-old Pakistani Canadian actor is attracting attention not only because of the plum role in the series, but also for representing what many hope is the changing face of Hollywood, with more diverse talent in inclusive starring roles.
“It’s not really the brown girls from Jersey City who save the world,” we hear in the show’s trailer. Wrong.
“Ms. Marvel” is streaming on Disney+.
‘The Janes’
With so much conversation these days around Roe v. Wade, it’s an ideal time to remind people of the historical significance.
“The Janes” tells the story of seven women who were part of a clandestine network that in the early 1970s helped women seeking safe, affordable abortion care when it was illegal.
The doc is currently streaming on HBO Max, which is owned by CNN’s parent company.
‘Amy Schumer Presents: Parental Advisory’
Amy Schumer has a long-standing relationship with Netflix, and now, she’s offering opportunity to some other comics.
Lil Rel Howery, Chris Distefano, Christina P, Ron Funches, Rachel Feinstein and Jaye McBride are featured in Schumer’s comedy special, bringing different jokes centered around family life.
Get ready to laugh when the special starts streaming Saturday on Netflix.

Carrie Underwood is undoubtedly as successful a songwriter as she is a superstar singer.
Underwood cowrote 11 of the 12 tracks on her latest album, “Denim & Rhinestones,” according to her site.
Fans will have plenty of opportunity to enjoy the music live, as Underwood is kicking off a tour in support of the new album in Greenville, South Carolina, in October and will be on the road through mid-March 2023.
“I’m thrilled to be hitting the road again with the Denim & Rhinestones Tour,” Taste of Country reports Underwood as saying in a news release. “I’m having such an amazing time with my Las Vegas residency and look forward to continuing that next year after the tour.”
“Denim & Rhinestones” drops Friday.
BTS fans can never get enough from K-pop’s hottest group.
That’s why it’s a good thing the boy band’s latest, “Proof,” is an anthology album.
Details are scant, but we do know that there are three discs that include previously unreleased music.
Bring it on when “Proof” drops Friday.

I have been pretty outspoken about the reboot fatigue, as I often think it’s a fallback for a lack of creativity in Hollywood.
But when it comes to bringing “Scrubs” back, yes, please and thank you.
The series, which ran from 2001 to 2010, made us fall in love with the cast of characters who worked at the fictional teaching hospital Sacred Heart.
So when series creator Bill Lawrence said recently that he’s open to getting the band back together, with one of the stars — Donald Faison — suggesting perhaps a “Scrubs” movie, you probably heard my elated squeal.
The TV comedy literally had it all — slapstick, an endearing bromance between Zach Braff’s J.D. and Faison’s Turk, and high-profile guest stars like Heather Locklear and Michael J. Fox.
A revisit would be more than welcome.

Celebrities are no strangers to taking up causes, but for Matthew McConaughey, the mass shooting at Robb Elementary School was personal.
That’s because the award-winning actor is from Uvalde, Texas, where the massacre of 19 schoolchildren and two teachers took place. This week, he traveled to Washington, DC, to advocate for better gun control.
It was hard to ignore the impassioned plea from McConaughey, who along with his wife, model Camila Alves, has been spending time with the families of the victims.
“You know what every one of these parents wanted, what they asked us for?” he said during a White House press briefing on Tuesday. “What every parent separately expressed in their own way to Camila and me? That they want their children’s dreams to live on.”
Here’s hoping people listened.