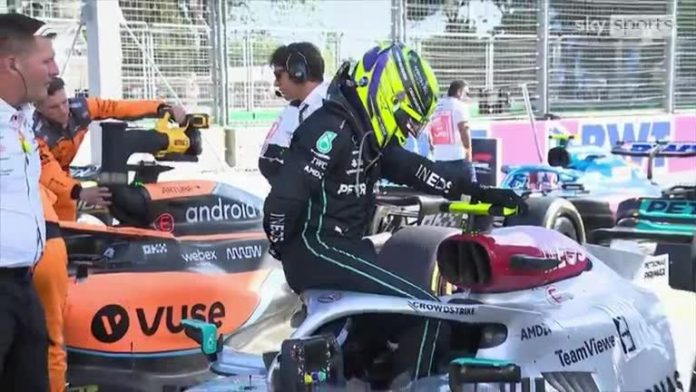 Lewis Hamilton finished fourth in Baku but his car provided him with a painful ride; Mercedes boss Toto Wolff apologised to seven-time world champion and said the team would “sort themselves out”; George Russell was third as Mercedes benefited from Ferrari’s reliability woes

Lewis Hamilton has revealed the pain caused by the bouncing of his Mercedes left him “praying for the end” of the Azerbaijan Grand Prix on Sunday.

After Hamilton had experienced severe discomfort during practice and qualifying on Friday and Saturday, the Mercedes driver had warned he was concerned about making it through the race.

The seven-time world champion battled through Sunday’s 51 laps of the Baku City Circuit to finish in fourth, making several overtakes to take advantage of the extra points made available by a Ferrari double DNF, which left Max Verstappen to lead a Red Bull one-two.

Hamilton’s performance, along with team-mate George Russell finishing third, provided a boost in what has so far been a hugely disappointing season for Mercedes, but the discomfort suffered by the drivers has led to a debate on whether F1’s new design regulations for 2022 need to be altered.

Hamilton, who struggled to get out of his car at the end of the race, said he was only able to see the chequered flag thanks to adrenaline.

“That’s the only thing,” Hamilton said. “Biting down on my teeth through pain and just adrenaline.

“I can’t express the pain that you experience, particularly on the straight here. At the end, you’re just praying for it to end.”

Russell: It was pretty brutal

Russell’s performance saw him close the gap to third-placed Charles Leclerc in the drivers’ championship, while Mercedes are now just 38 points behind Ferrari in the constructors’ standings.

“The team did a great job with the strategy. Once we fix this bouncing, we’re going to be right there in a race. We’re losing at least a second with bouncing, for sure,” Hamilton said.

“I’ll be at the factory tomorrow; we’ve got to have some good discussions and keep pushing.”

Russell, who is the only driver to have finished in the points at all eight races this season, also experienced an uncomfortable ride in Baku and believes wider conversations need to be had about the issues of bouncing and porpoising.

“I was pretty pleased to see the race coming to a close,” Russell said.

I don’t know what the solution is to be honest. The majority of us are in the same boat, either you’ve got porpoising and the car is bouncing up and down and hitting the floor, or you don’t and you have to run the car millimetres from the ground and you’re hitting the floor lap after lap. Whichever boat you’re in, it’s not a pleasant one.

“You’re just smashing the ground every single corner and lap for an hour and a half, it’s pretty brutal. I’ll sleep well tonight. It’s a circuit that’s not normally that physical [too].

“It’s just what we’ve got to deal with and live with at the moment, and what we as drivers have to expect.

“There’s not going to be any short-term changes but there are conversations ongoing about the long-term future of these regulations.

“We’ve got a lot of brilliant engineers and intelligent people in this sport and I’m sure we’ll find the right solution.”

Daniel Ricciardo, who produced an improved performance to finish eighth ahead of his McLaren team-mate Lando Norris, expressed his sympathy for the Mercedes drivers after the race.

Despite struggling for pace at times this season, McLaren have been one of the teams least affected by bouncing or porpoising, but the bumpy Baku circuit saw the Australian suffer.

“I feel like, you know when pro basketball players bounce the ball really low, that’s what I felt like someone was doing to my helmet,” he told Sky Sports F1.

“It got worse and worse, and I sympathise with everyone that’s had it now. It’s bad. I genuinely feel rattled. I’m definitely going to help out when people talk about it.

“I know George has been vocal about it, that it’s not sustainable.

“It’s not good for our general health and wellbeing. It’s not normal the high frequency load that we get. I’m shaken, probably because it’s the first time I’ve truly felt what some others feel. It definitely felt bad.”

With the Canadian Grand Prix quickly following next weekend, with practice sessions starting on Friday, the issue could be on the agenda once more in Montreal.

After that, there is a slightly longer gap before Formula 1 arrives in Great Britain and Silverstone hosts the British Grand Prix from July 1-3.