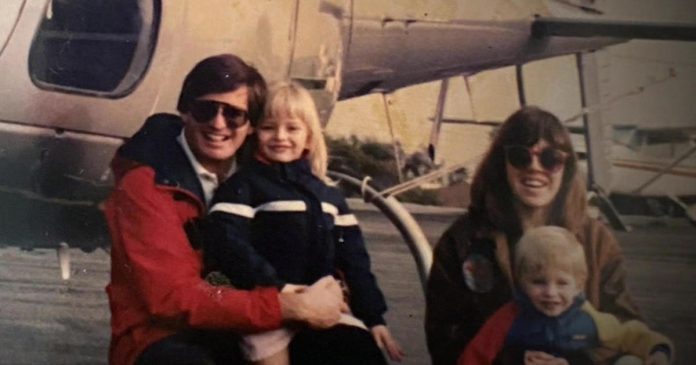 If you want to see everything in Los Angeles, you can’t beat the view from a helicopter. And for much of the 1980s and ’90s, news chopper pilot Bob Tur and wife Marika Gerrard saw it all. On any given story, Bob, who then flew for local CBS stations, would typically be first over the scene, and Marika would lean out the open door with her camera to capture the story – and, at times, history.

There were the 1992 L.A. riots, the O.J. Simpson car chase, and more catastrophes that you can count.

They started the Los Angeles News Service, and when they started a family – Katy, and later James – they brought ‘em up in the sky.

“When I was a kid they were the coolest people in the world,” said Katy Tur, whom you might know as an MSNBC anchor, or as a mother of two, married to CBS News’ Tony Dokoupil. “We had a helicopter. I got to go up in a helicopter. I knew how to fly a helicopter! it was a really unique and interesting childhood that nobody else had.”

In the ’80s Katy was just a cute little kid with a seat on the wildest ride in town. “The images were wild,” she told Smith. “And I was in a front row seat for it. Literally in the helicopter, feeling the flames on my shins. You could feel it.”

In her latest book, “Rough Draft” (from an imprint of Simon & Schuster, a division of CBS’ parent company), Katy describes her parents as broadcast pioneers who often put themselves in harm’s way.

“Now that I think about it, I think, ‘This was ridiculous that the both of us were up in the air doing this dangerous stuff, and we have two kids,'” said Marika Gerrard. “And what was gonna happen if something happens to both of us? … It was too much excitement. Too much fun. It really was. It was exciting and it was fun.”

But the fun was often fleeting; Katy says her dad could be demanding, abusive, and at times violent.

“He would come home in these fits of anger,” she said. “Something would set him off, and he would get so, so out of control that he would throw his fist through a wall. And it happened often. I mean, we would go to the store, buy plaster, plaster them up. I remember him throwing batteries at my mother. The violence was always there. It felt like it was normal, like that was just how a relationship worked. It got angry, it got violent, you yelled and you screamed, and then everything was fine.”

But over time, she says, the situation got worse.  “And the reason we didn’t call the cops was because Bob Tur’s name in a police blotter means Bob Tur can’t make any more money, and, oh my God, we need to buy groceries,” said Katy.

Marika added, “Right. But, you know, that’s why it kept going. And that’s why it always keeps going. Because there’s always somebody who forgives the person, or hides it … and who actually benefits from that? Nobody.”

“There’s a lotta fault to go around,” Marika said.

Last week Smith took Katy on her first helicopter ride in more than 20 years.  Some things, like the feel of a chopper in flight, never change. “How amazing is this?” Katy said. “Who gets to go up like this? Nobody!”

And some change has been dramatic.

In 2013 Katy’s father called her with news that came as a bit of a shock: “My dad said, ‘I am a woman.’ And I said, ‘What?’ And my dad said, ‘I’m a woman. I’m transitioning. I’m gonna become a woman.’ And I remember being at first puzzled, saying, ‘You’ve gotta be joking. You kidding? What are you talkin’ about?’

“And my dad was adamant: ‘I’m the wrong person. I’m gonna become the right person. Don’t you see, this is why I’ve been so angry.’ And it was really just – it was a lot.”

Zoey Tur now lives in northern California. “Katy and I were very close,” she told Smith. “She really looked up to me. And I failed her. No father wants to fail their daughter.”

Smith said, “Let me tell you what she says you did when she was younger: She says you’d get so angry that you’d punch holes in the wall, and that you threw things like batteries at Marika. Is that true?”

“Throwing batteries? Probably, yeah,” Zoey replied. “Punching walls? There were a couple. I was in the news business, and we were under extraordinary pressure. I could be very intimidating, for sure. And, you know, if the kids felt I was intimidating, I apologize. I did the best I could.”

Katy Tur says they haven’t seen each other in 10 years, and while they have different takes on why they’re estranged, it’s clear there’s still love there.

Zoey said, “I’m not hiding anymore. And if it takes an act of public humiliation in front of a camera to make Katy feel better and feel vindicated, so be it. I’m happy to do that. I love her that much.”

Katy Tur admitted during her helicopter ride with Smith that “I am also afraid of heights. You can’t get me anywhere near an edge, and I will, like, I will seize up. But I can, like, lean, I can, like, press myself up against the glass [of the helicopter] and feel totally fine.”

Katy knows that looking down can be both scary and exhilarating – and the same is true of looking back.

Smith asked, “So, it’s understandable and commendable, facing your past. Why put it out in the public?”

“It’s a really good story,” Katy replied. “My parents did amazing things. They went from nothing to something big and important. And who wouldn’t wanna read that story? I want that story to be down. I want my kids to know this. I want them to know my parents the way that I knew my parents, even if they never end up meeting their grandfather. And part of the story is the violence. If I only wrote the good stuff, it would have been a lie. And it’s a business where you’re not supposed to lie; you’re supposed to tell the truth. And this is the truth.”