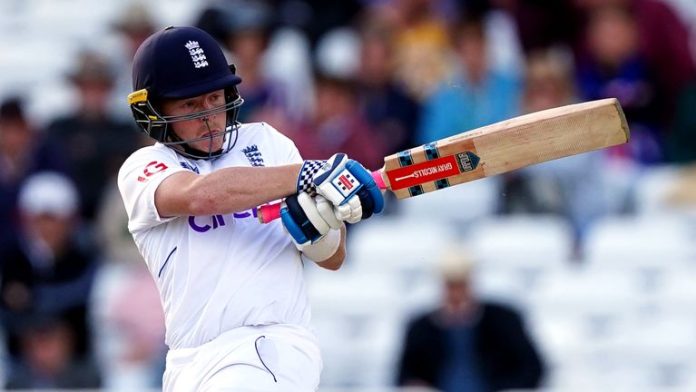 Ben Stokes backed Ollie Pope to step up as England’s No 3 and on day three at Trent Bridge the right-hander started to repay the faith shown in him with a brilliant second Test ton against New Zealand; a classy knock showed why the new leadership team back him to make the position his own

Ollie Pope’s face was a picture of elation – and no shortage of relief.

With the sun shining and a flat pitch beneath his feet, he knew he would have few better chances to re-establish himself in an England shirt and, in completing an elegant second Test match hundred, he had done just that.

Rewind to early 2020 and had you predicted Pope batting at three and scoring a century for England in a Test in the summer of 2022, it would have been unlikely to get much of a reaction. Sounds about right.

The Surrey right-hander had just enjoyed a breakthrough tour in South Africa, scoring his first Test century and looking every bit England’s coming man in the longest form of the game.

Far more surprising would have been the idea that he might have to wait nearly two-and-a-half years to register another international ton. This was Joe Root’s heir apparent after all.

Instead, the past two years have seen Pope’s star fade significantly. The runs have flowed for Surrey and his first-class average remains north of 50, but in an England shirt it has been a case of diminishing returns.

Even the eye-catching cameos were getting shorter and shorter, to the point that during the Ashes over the winter a pretty 20 or 30 seemed a long way off.

Frenetic was the word most often used to describe him at the crease. Jittery or nervy would have worked just as well, Pope was frazzled and seemingly devoid of confidence.

He was dropped and remained out of the side for the tour of the Caribbean in March.

So, when it was announced that not only was he being recalled but promoted to No 3, a position he had never batted before in first-class cricket, it was a huge show of faith from England’s new leadership team.

Pope at three certainly fit in nicely with the bold approach expected from a Test team captained by Ben Stokes with Brendon McCullum as head coach and the 24-year-old’s talent and array of shots were never in question.

More debatable was whether he had the temperament and the defensive technique required of a batter who could find himself facing the second ball of the innings. And even if they believed he did, after such a challenging few months, was this really the best time to test that theory?

The answer from Stokes, unequivocally, was “yes”. The new skipper could not have been more fulsome in his backing of both Pope and Zak Crawley.

“As soon as I took the role on, one of the things that I made very clear is that I want Ollie Pope in my Test team,” he said. “He’s such a good player and I see him having a huge future in an England shirt. It was just about making a decision where we see him fitting in in that batting order.

“I just hope that under mine and Baz’s laidback and ‘go-and-express-yourself’ way that the world will get to see what Zak Crawley and Ollie Pope are all about. I just see this as a complete and utter blank canvas for this Test team going forward.”

The reset did not bring an immediate change of fortunes with Pope making scores of seven and 10 in the first Test at Lord’s.

Coming in at 6-1 on Saturday evening then, knowing big runs were needed after New Zealand had racked up 553, the early nerves were understandable.

Pope held his nerve, though, got himself in and things began to fall into place. A pair of exquisite cover drives were a reminder, perhaps even to himself, of the class he possesses and with nothing in the pitch to concern him, he went about showing it as he eased to a fluent half-century before stumps.

He required some luck as Daryl Mitchell dropped him on 37 but, having got it, the important thing was making it count.

“Here is your opportunity, you’ve asked for a flat pitch, you’ve got it – now go and cash in,” Nasser Hussain said ahead of day three.

Pope duly obliged. He began the day in the same vein as he had ended the previous evening, scoring freely and adding to his collection of sumptuous drives.

His coach and captain will have been delighted by that but they will have been just as pleased with the way he reacted to being starved of the strike and seeing his scoring rate dip.

Where previously, such things would have seen those jitters return, this time Pope was able to stay calm. The nature of the pitch and knowing that there were plenty more runs to be had if he stayed patient may have helped but, regardless, it was important for him to show that mindset.

His reward came soon after lunch as he scurried back for two to take him to his first Test century on home soil. The crowd rose to acclaim him but nowhere was the applause more enthusiastic that on the England balcony.

Out in the middle, Root ran 40 yards to congratulate his batting partner – on a personal note no doubt delighted to see somebody else in the top four capable of shouldering the burden of runs, but clearly thrilled to see a young player battle his way back after such bruising couple of years.

The crowd were on their feet again early in the evening session as Pope departed for a superb 145.

England will hope so too. If Pope gets anywhere close to fulfilling his potential then he can look forward to plenty more days like today.

For now, though, he can consider this the first instalment as he goes about repaying the immense faith shown in him by his captain.

Backstage With… Joe Cornish on his first TV project since The...