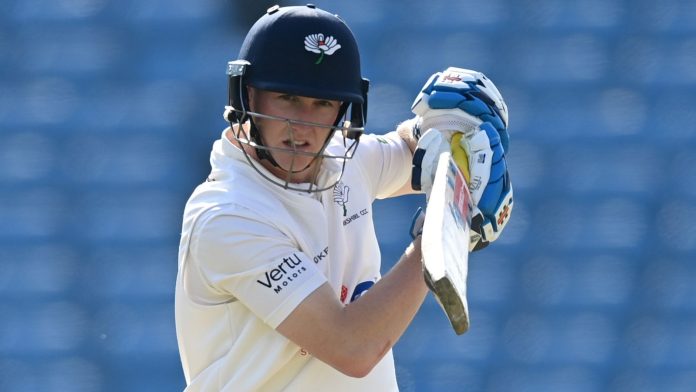 George Hill also makes 131 in Yorkshire’s clash with Hampshire; Glenn Phillips hits 125 for Gloucestershire against Kent; Rachin Ravindra fires a career-best 178no on his Durham debut at home to Worcestershire

Harry Brook continued his extraordinary LV= Insurance County Championship season with his ninth score over 50 as Yorkshire piled on the runs on a flat Ageas Bowl pitch.

Brook, who was released from the Test squad to play in this match, has played 10 red-ball innings in 2022 with a lowest score of 41 and three centuries.

Against Hampshire, he showed his class with 76 but it was George Hill who spent the majority of the day grinding out a 220-ball century, the second of his career, before eventually departing for 131. Yorkshire reached the close on 324-5.

Jamie Overton made no concession to brotherly love on an explosive return to Taunton as Division One leaders Surrey bowled out Somerset for 180 on the opening day of their LV= Insurance County Championship match.

The tall pace bowler, facing his former club, claimed three wickets and also sent twin Craig and Josh Davey for concussion assessments by striking them on the helmet with short-pitched deliveries.

Craig Overton returned to continue his innings when Davey was ruled out for the rest of the match and replaced by Kasey Aldridge, and top-scored with 29.

Second-placed Hampshire toiled at Southampton after Yorkshire posted 324-5 having elected to bat.

Hill (131) and Brook (76) put on 141 for the third wicket as the latter, released from England’s Test match to play, became the leading run scorer in the country by registering his ninth score over 50.

Gloucestershire recovered from a shaky start to finish the day 338-7 in the battle of the bottom two against Kent.

Having been reduced to 46-3 New Zealander Glenn Phillips fought back with 125, assisted by Miles Hammond (66) and Oli Price, who chipped in with a career-best 48 not out on his 21st birthday.

The home side were all out for 292 just before the close, with Hain the last to fall for 130.

Luke Hollman (48) and Ethan Bamber (37) helped Division Two leaders Middlesex to 251 all out on the opening day against Derbyshire at Chesterfield, having slipped to 171-7.

Championship debutant Toby Pettman took 3-40 with Anuj Dal claiming 2-13 with 11 maidens in his 15 overs, before Derbyshire moved to 28-0 at stumps.

Sussex’s Oli Carter scored a maiden first-class hundred as the visitors posted 245-7 against Glamorgan in Cardiff.

Carter came to the crease with his team in trouble at 29-2 and finished the day on 113no, with Tom Clark next-best with 55, as Andrew Salter conceded just 65 from 33 overs in the day.

Rachin Ravindra scored a career-best 178no on his Durham debut at home to Worcestershire.

The New Zealander, only signed for one match after Keegan Petersen’s premature departure, made an impression with his fourth century in first-class cricket as he became the first overseas player since Tom Latham to score a century on debut for the county.

He shared a mammoth second-wicket 230-run stand with Scott Borthwick (96), and added an unbeaten 104 with fellow debutant Jonathan Bushnell (61no) as the hosts reached stumps on 375-3.

Centuries from Lewis Hill (104) and Colin Ackermann (116) enabled winless Leicestershire to enjoy their most productive opening day of the season so far at home to Nottinghamshire.

Put into bat the hosts closed on 340-8 – their highest total of the campaign – as Hill shared a third-wicket partnership of 141 with Ackermann, both players becoming only the second and third players to score Leicestershire centuries this season.