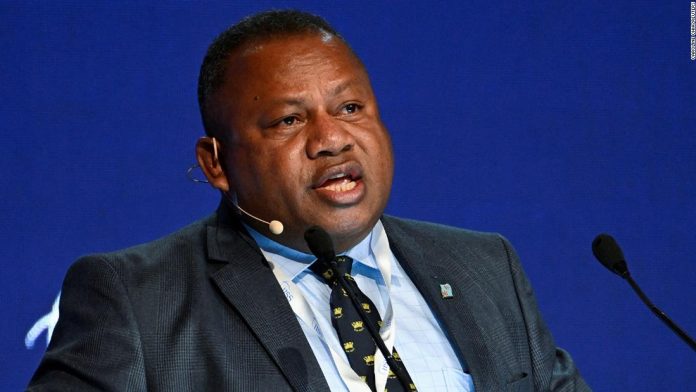 The low-lying Pacific islands, which include Fiji, Tonga and Samoa, are some of the most vulnerable countries in the world to the extreme weather events caused by climate change.
Fiji has been battered by a series of tropical cyclones in recent years, causing devastating flooding that has displaced thousands from their homes and hobbled the island’s economy.
“In our blue Pacific continent, machine guns, fighter jets, gray ships and green battalions are not our primary security concern,” Inia Seruiratu, Fiji’s Minister for Defense, said at the Shangri-La Dialogue, Asia’s top security meeting.
“The single greatest threat to our very existence is climate change. It threatens our very hopes and dreams of prosperity.”
The meeting, which closed on Sunday, was dominated by debate over Russia’s invasion of Ukraine and rising tensions between the United States and China over everything from Taiwan’s sovereignty to naval bases in the Pacific.
The Pacific islands became a focus of regional tensions this year after China signed a security pact with the Solomon Islands in April, alarming the United States, Australia and New Zealand, who fear a stepped-up military presence by Beijing in the Pacific.
Beijing has said that it is not establishing a military base in the Solomon Islands and that its goal is to strengthen security cooperation with Pacific island nations.
China’s Foreign Minister Wang Yi conducted a tour of the Pacific islands last month in the hope of securing a sweeping regional trade and security pact, but the island nations were unable to reach a consensus on a deal.
Seruiratu played down concerns about a battle for influence in the Pacific islands while highlighting his country’s willingness to work with a range of countries.
“In Fiji, we are not threatened by geopolitical competition,” Seruiratu said in his speech.
“We have to adapt how we work and who we work with to achieve stability.”

Analysis: Peru’s embattled president could have eased the crisis. What happened?

How the James Webb Space Telescope Takes Such Stunning Pictures

Analysis: Peru’s embattled president could have eased the crisis. What happened?