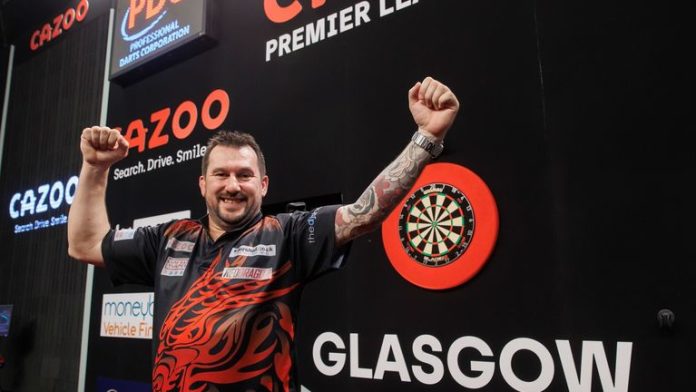 Welshman Clayton is the firm favourite to retain his title after becoming the fourth player in Premier League history to top the league phase, following in the footsteps of Phil Taylor, Van Gerwen and Glen Durrant.

Dutchman Van Gerwen will be eyeing a sixth Premier League crown and first since 2019.

However, Wade, who is seeking to reclaim the title he won 13 years ago, and Masters champion Cullen will have something to say as they look to prevent the dream final from happening in Germany.

Clayton will face Cullen in the opening semi-final, before former champions Van Gerwen and Wade collide – having finished second and third respectively.

We spoke to Sky Sports’ Laura Turner for her thoughts ahead of what should be a titanic night of tungsten.

Clayton vs Cullen: Can ‘The Rockstar’ dethrone the champ?

“I picked Clayton pre-match and I haven’t changed my thoughts on that. Jonny became just the fourth person in history to top the table and I see him winning it.

“I do see so many similarities with Cullen’s journey and Clayton’s from last year, where they both made the Premier League after winning The Masters, then getting a place in the Play-Offs at the last attempt, so there are many parallels.

“I quite like a story and there’s a story there if Cullen gets past Clayton, but I think Jonny is buzzing at the moment. He’s in a good place and his darts are absolutely fantastic. I can see him edging this one.”

MVG vs Wade: Can ‘The Machine’ upset ‘Mighty Mike’?

“James Wade has been slightly underestimated throughout the tournament. He’s proved the doubters wrong by making the Play-Offs in third position.

“That said, Michael van Gerwen is such a phenomenal player as he would say, but I think with the longer format I think he edges it but I do think it will be close. It could go either way, like any match, but Michael edges it for me. That’s not to say Wade will be too far behind.”

So, who’s making the final? And who wins outright?

“Based on those semi-finals, I think it will be Clayton and MVG in the final and I think Clayton wins it.

“His confidence is at an all-time high, while if MVG’s game is not there straight away then his head can dip and Jonny is such a strong frontrunner.

“It’s going to be back-to-back success for Jonny Clayton.”

What do you make of the format changes this year? Here to stay?

“I’ve really enjoyed the change this year. I think it’s been exciting and I think the crowd get to see more walk-ons, more matches, and there’s a conclusion to the evening.

“I know some people have said that the format can be repetitive, but they said the same thing about the last format. I think it’s really worked.

“I’ve enjoyed it, especially towards the tail end where we were wondering who was going to stay in? Who was going out? Who’s keeping their chances alive? It’s been exciting and for the players, there’s that additional £10,000 bonus. I was so pleased to see Michael Smith win that last event. It meant that everyone had won at least one of the events.

“I’m looking forward to seeing it all again next year.”