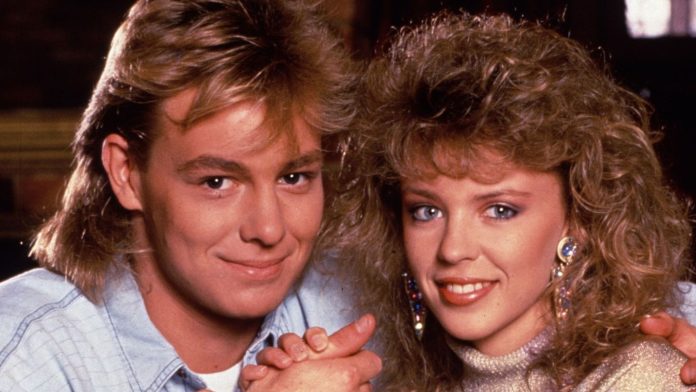 Kylie Minogue has spoken about her emotional return to the set of Neighbours, crediting the soap as her “big break” and saying it is part of her history.

The pop megastar rose to fame after starring as Charlene in the Australian soap in the 1980s, and recently returned to film reunion scenes to mark the end of the show after 37 years.

Alongside Jason Donovan, her on-screen husband Scott Robinson, viewers will see Minogue‘s return to Ramsay Street when the final episode airs in August.

“It was emotional going back to the set and felt beautiful, actually, the fact that we could see each other,” she said. “I haven’t seen these people in – some of them – for over 30 years.

“And, you know, life passes by and we’ve all gone through different stuff. And just to kind of be face-to-face and say, wow, this is part of our history. It was great.”

Neighbours, which first aired in Australia in 1985 before coming to the UK the following year, was axed earlier this year after failing to secure new funding since being dropped by its broadcaster.

After much speculation, the announcement in April that Minogue and Donovan would reprise their roles – which saw them get married in one of the most famous weddings in soap history – sent the internet into a frenzy.

The pair also dated in real life and released the single Especially For You together in 1988.

Minogue said Charlene’s return is a “blink and you’ll miss me” moment but that the news had spread fast and taken on “a life of its own”.

Speaking about her time on the soap, she said: “I started acting some years before that, but my kind of big break and I guess how I became a household name was through Neighbours in 1986, so many moons ago.”

The final day of filming took place on 10 June, with producers sharing a photo of cast and crew from the last day on set.

Read more: Karl Kennedy star on the end of Neighbours

“We all knew this day was coming but until we were here in this moment when the very last scene was filmed, it was hard to express how we would all feel,” he said.

“Of course, it is sad and tears were shed, but we’re also enormously proud. Thirty-seven years is an incredible achievement and that should be celebrated.

“We’ve also been incredibly touched by the response from our viewers all over the world. Neighbours is more than a TV show to many people. They see us as part of the family and we feel privileged to have been invited into their homes, and I know the legacy of Neighbours will live on for many years.”

Minogue is one of a number of stars who rose to fame on the show, with fellow alumni Guy Pearce (Memento, LA Confidential, Iron Man 3) also returning for the finale.

Other household names who once lived in the fictional suburb of Erinsborough include Russell Crowe, Margot Robbie, Holly Valance, Natalie Imbruglia and Liam Hemsworth.