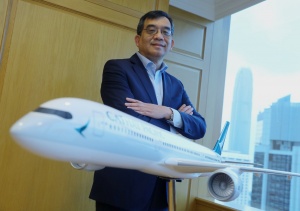 Hong Kong flagship carrier Cathay Pacific Airways on Tuesday said it would be able to access a HK$7.8 billion (US$1 billion) loan facility in the next 12 months after the government extended the drawdown period of the capital as part of its 2020 bailout plan.

The loan facility was extended for the second time in two years.

Cathay CEO Augustus Tang Kin-wing said the airline did not need to draw down the loan in the past 12 months due to “prudent cash management”, despite a “difficult operational environment”.
“The further extension of the drawdown period is greatly appreciated and will provide us with flexibility to manage our liquidity position,” he said.

The bridge loan, which had been extended until June 8 next year, was part of a HK$39 billion rescue package led by the government to help the airline weather the coronavirus crisis in return for a 6.5 per cent stake in the company.

Last month, airline chairman Patrick Healy said that Hong Kong was “falling behind” as the rest of the world opened up to travel following the decline of the Covid-19 pandemic, but added the recent relaxation of quarantine restrictions would help the airline reduce its cash burn rate.

The Cathay Pacific Group had HK$30.3 billion in liquidity at the end of 2021, compared to HK$28.6 billion at the end of 2020. It was also aiming to reduce operating cash burn to less than HK$500 million per month for the next few months.

Shukor Yusof, of aviation advisory firm Endau Analytics, called the move “prudent” to ensure that should things go awry in the next 12 months, the airline had sufficient funds to keep going.

Simon Lee Siu-po, co-director of the international business and Chinese enterprise programme at Chinese University, said that while the airline’s current cash position was healthy, when the business began growing again, staff and fuel costs would increase significantly.

“The extension of the loan facility allows Cathay to use it when needed in the recovery period. June 2023 is not far away from now for Hong Kong, as Hong Kong is still not formulating a road map to restart international travel. This is much slower than other countries and airlines. Extension is necessary,” Lee said.

Singapore Airlines and Scoot, the two airlines in the SIA Group, reported passenger capacity reached 57 per cent of pre-Covid-191 levels in April.

That same month, Cathay operated at about 2 per cent of its pre-pandemic passenger capacity, while its cargo capacity stood at 29 per cent.

From May 1, the government began to relax travel and quarantine restrictions, and the airline said it was trying to add back capacity.

The airline had also started adding more employees, with the carrier planning to hire hundreds of cabin crew who were previously laid off or resigned.

“We have already recommenced hiring, as we plan for the anticipated recovery in Hong Kong and global aviation in the 18-24 month period ahead,” Tang said.