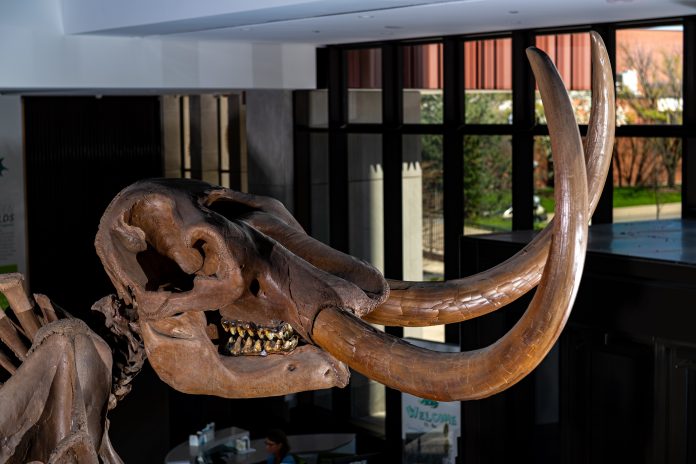 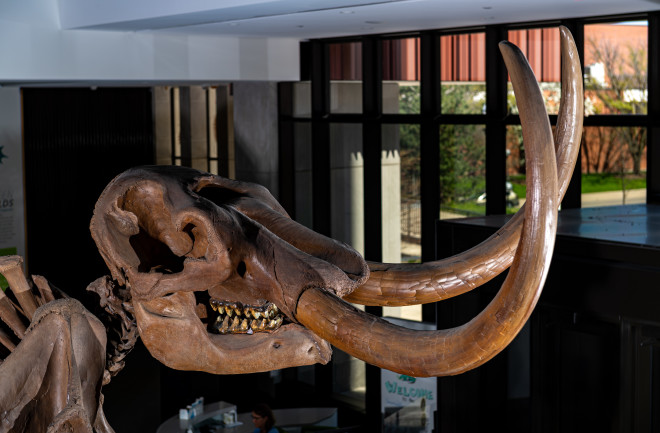 (Credit:Photo credit: Eric Bronson, Michigan Photography.) A mounted skeleton of the Buesching mastodon, based on casts of individual bones produced in fiberglass, on public display at the University of Michigan Museum of Natural History in Ann Arbor. The Buesching mastodon is a nearly complete skeleton of an adult male recovered in 1998 from a peat farm near Fort Wayne, Indiana. A new study, led by Joshua Miller of the University of Cincinnati and Daniel Fisher of the University of Michigan, uses oxygen and strontium isotopes from the mastodon’s right tusk to reconstruct changing patterns of landscape use during its lifetime.

And thanks to modern technology, scientists can now understand more about this prehistoric mammal. Researchers from the University of Cincinnati, the University of Michigan and the University of Nebraska-Lincoln used a geochemical process to determine the migration patterns of the Buesching mastodon, and published the findings in a recent study.

The Buesching mastodon was first discovered near Fort Wayne, Ind. in 1998. Experts believe a rival mastodon tusk punctured the right side of his skull and killed the mastodon. Researchers believe it had migrated to a summer mating territory — nearly 100 miles away from his home territory — and that a potential mate had been the cause of the fight. Now, with the use of Strontium Isotope Geochemistry, researchers may be able to prove that mastodons were indeed migratory animals.

“The result that is unique to this study is that for the first time, we’ve been able to document the annual overland migration of an individual from an extinct species,” says Joshua Miller, the study’s first author and University of Cincinnati paleoecologist in a press release.

“Using new modeling techniques and a powerful geochemical toolkit, we’ve been able to show that large male mastodons, like Buesching, migrated every year to the mating grounds,” says Miller in a press release.

A tree ring can determine age and climate conditions during certain years, and now, the mastodon tusk can determine the types of vegetation the animal was eating, along with the chemical elements in their drinking water.

Operating under a microscope, researchers drilled half a millimeter into the 13,000-year-old tusk, and collected powdered residue to chemically analyze.

They took over 30 samples from the tusk. Some from the early years of the mastodon’s life and some from its final years.

After chemically analyzing the residue, researchers were able to find that the strontium isotopes levels, found in certain areas, in the tusk acted like a map to pinpoint where the mastodon had been during his life. The oxygen isotopes also found in the tusk were able to determine what time of year the mastodon spent at a certain location.

“Every time you get to the warm season, the Buesching mastodon was going to the same place — bam, bam, bam — repeatedly. The clarity of that signal was unexpected and really exciting,” says Miller in a press release.

Miller and his colleagues then fed the isotope samples into a movement model, determining that the Buesching mastodon most likely called Central Indiana home, but had ventured into Michigan and other surrounding areas. This is something that has never been done before for an extinct species.

“The field of strontium isotope geochemistry is a real up-and-coming tool for paleontology, archaeology, historical ecology and even forensic biology. It’s flourishing,” says Miller in a press release. “But, really, we have just scratched the surface of what this information can tell us.”

Iran ‘to pardon tens of thousands of prisoners’ jailed during protests