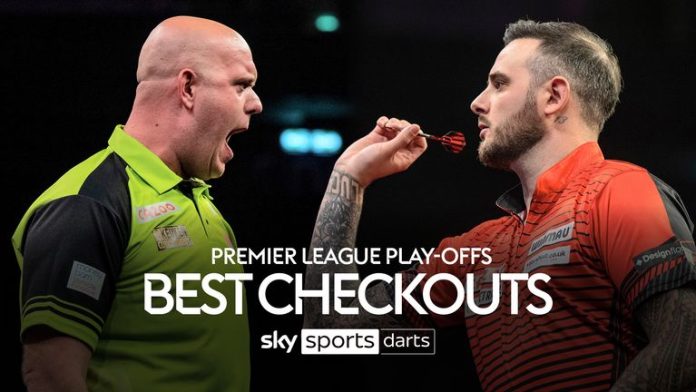 Michael van Gerwen joins the legendary Phil Taylor as a six-time Premier League champion after winning the title for the first time since 2019; the Dutchman edges Joe Cullen on an incredible night of action at the Mercedes-Benz Arena in Berlin to take home £275,000

The Dutchman edged out a heartbroken Cullen 11-10 in an all-time Premier League classic, after the Yorkshireman missed a match dart at double 16 in a thrilling decider.

Van Gerwen kept his cool to regain the crown he last won in 2019 and equal Phil Taylor’s haul of six Premier League titles.

“I have been going through a really tough time, so to win this title, it means a lot to me,” reflected Van Gerwen, who celebrated his first big TV title for over 18 months.

“I’m a happy man. Joe Cullen was phenomenal in that final. What a day. I’m over the moon.

“Of course I am going for more titles now. To have won this trophy here in Berlin is amazing.

“This last 18 months has hurt me. I know what I’m capable of, but this crowd in Germany today, they were absolutely sensational. I think they were a credit to the sport.”

The next five legs went with throw, before Van Gerwen appeared to strike the decisive blow in leg 19, converting a sensational 92 checkout to break throw in 12 darts and move one leg away from glory.

The drama continued as Cullen produced a 13-dart break to force a decider, but it was the Dutchman who claimed a monumental victory thanks to double 14, having survived a match dart at double 16 in the previous visit.

MVG has played six deciding legs in televised finals in his career, and has won all six.

“Michael is a fantastic player and a fantastic champion, but I am absolutely gutted,” admitted Cullen, who was bidding to become the third successive debutant to be crowned Premier League champion.

“I cannot believe I’ve lost, but credit to Michael, he is a great guy and a wonderful champion.

“I think the second leg cost me, missing three at 32 for a break of throw. I’m absolutely devastated.”

Earlier in the evening, Cullen averaged almost 101 and crashed in 11 maximums – equalling the tournament record – as he dethroned Jonny Clayton’s bid for back-to-back Premier League titles with a 10-4 success.

In the second semi-final, Van Gerwen defeated 2009 champion James Wade by the same scoreline – winning seven of the last eight legs to triumph with a 99 average and six 180s.

Check out daily Darts news on skysports.com/darts, our app for mobile devices and our Twitter account @skysportsdarts. We’re back for the World Cup of Darts on Thursday, June 16 – live on Sky Sports Action from 6pm.