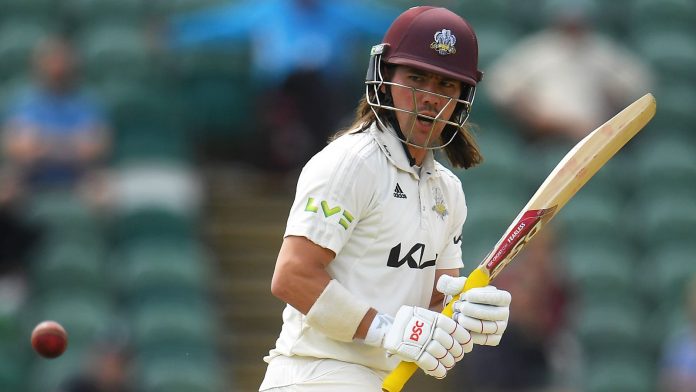 Surrey in a commanding position against Somerset in their LV= Insurance County Championship Division One clash as Rory Burns scores a century; Rachin Ravindra’s debut score of 217 helped Durham to their third highest first-class total of 642-7; Yorkshire remain in good position

A round-up of Monday’s action in the County Championship as a century for Rory Burns put Surrey in a strong position against Somerset, while Rachin Ravindra’s debut score of 217 helped Durham to their third highest first-class total of 642-7.

Rory Burns scored his second century of the LV= Insurance County Championship season to put Surrey in a commanding position heading into day three of their match against Somerset.

Roelof van der Merwe later dismissed Burns with his first ball of the day and Will Jacks went well before falling short of three figures when he was dismissed on 88 by Martin De Lange, who replaced the concussed Craig Overton.

Hashim Amla was also not able to resume his innings due to illness but Jordan Clarke closed the day unbeaten on 63.

Kent fought back with the bat as they finished day two on 232-3, 206 behind Gloucestershire who were earlier bowled out for 438.

Daniel Bell-Drummond and Ben Compton made 89 and 80 respectively but were unable to convert their scores into centuries. Jack Leaning ended the day on 24 with Jordan Cox on 21.

Steven Croft fell 10 runs short of a century but was crucial in helping Lancashire to their overnight score of 280-9, just 12 runs behind Warwickshire.

Lancashire started their innings on Monday morning but lost Keaton Jennings early on before contributions from Luke Wells (36) and Dane Vilas (37) helped the visitors to a similar score at the halfway point of a finely balanced contest.

Yorkshire remained in a good position heading into the third day of their contest with Hampshire at the Ageas Bowl.

The visitors looked to add to their overnight score of 324 and Dom Bess’ unbeaten 51 helped them reach 428, with Brad Wheal (4-59) the pick of Hampshire’s bowling attack.

Hampshire’s reply got off to a rocky start when Jordan Thompson removed openers Ian Holland and Felix Organ within the first five overs but a 114-run stand from Liam Dawson and Ben Brown helped the hosts recover. Nick Gubbins added 58 but Hampshire still trailed by 203.

Rachin Ravindra’s debut score of 217 helped Durham to their third highest first-class total of 642-7 against Worcestershire.

Paul Coughlin and Ben Raine also knocked tons for the first time this campaign as they shared a record-breaking partnership of 213 for Durham’s eighth wicket.

Ben Duckett notched 145 and there were half-century contributions from Joe Clarke (89) and Haseeb Hameed (59) as Nottinghamshire responded with 373-5 to Leicestershire’s season-best score of 440.

The hosts added 100 to their overnight score before Nottinghamshire launched their innings and they finished the day with Steven Mullaney unbeaten on 37 alongside Tom Moores (four), still 67 runs behind.

Middlesex’s Toby Roland-Jones’ magnificent spell of 5-14 in seven overs sent Derbyshire to an almighty collapse as they lost their last seven wickets for 21 and limped to a score of 229 all out in response to the visitors’ 251.

Derbyshire looked relatively comfortable with Wayne Madsen (62) and Brooke Guest (40) at the crease but Roland-Jones’ spell helped Middlesex to a first-innings lead of 22.

Mark Stoneman made a solid start to Middlesex’s second innings with 60 not out as the visitors reached 95-3 – an advantage of 117.

The day had started with Oli Carter (185) marshalling the Sussex tail as they plundered 131 runs in 23.4 overs.