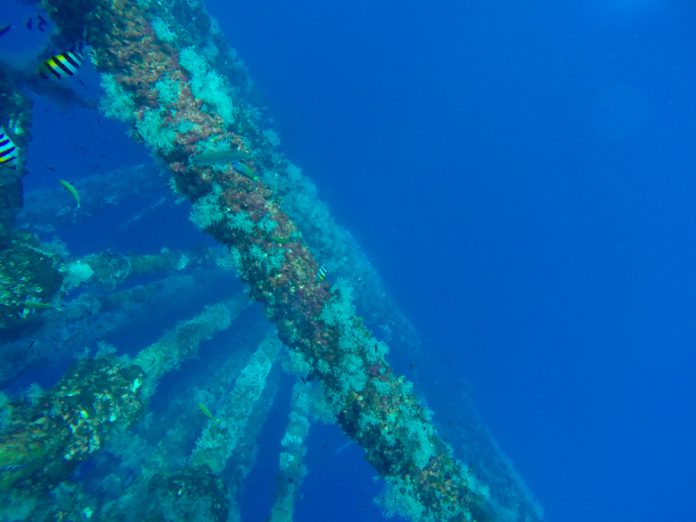 Underwater pipelines could attract the good, the bad and the ugly. New research from the National Oceanography Centre in the U.K. reports that a new oil and gas pipeline off the Angolan coast in Africa, harbors abundant and diverse wildlife. However, it also traps huge amounts of litter. Through long-term monitoring of the pipeline, the researchers hope to understand the impacts of human activity on remote deep-sea ecosystems and discover previously un-described species.

The deep sea is rife with awe-inspiring biodiversity, from anglerfish with lamplit heads to yeti crabs with bacteria-farming arms. However, reaching the deep sea is difficult and expensive. Researchers estimate that over 80 percent of the ocean is unexplored, and 90 percent of deep-sea creatures are un-described. The deep sea is also a hotspot for oil and gas exploration, and scientists are increasingly interested in understanding the impacts of deep-sea exploration on marine life.

To survey deep-sea biodiversity and to describe the human impacts of deep-sea exploration, researchers co-opted video footage of the seafloor originally filmed from the oil and gas company, BP. The footage, which was originally intended to inspect the pipeline, provided an affordable opportunity to study the surrounding ecosystem.

“We realized as soon as we saw the footage that it would allow us to explore how the marine life changed after the introduction of a pipeline,” Andrew Gates, a co-author on the study, says in a press release.

“The video was collected by an ROV – a remotely operated vehicle,” co-author Daniel Jones says in a press release. ROVs are robots that explore the seafloor and scientists remotely pilot them from a ship at the sea surface. They are safer, simpler and can stay underwater for longer than sending a human-occupied submarine.

By analyzing ROV footage from before and after pipeline construction, the researchers found that more animals were present after the pipeline was built, especially echinoderms – the group of animals that includes sea stars and sea urchins. However, they also found that the pipeline was covered with manmade junk.

“It was surprising to see the huge amount of litter, which consisted of plastic bags, bottles and aluminum cans, as this is a remote area ranging from 700 to 1400 meters deep,” Jones says in a press release.

The researchers believe that the pipeline traps nutrients for food and provides hard substrate for shelter, attracting animals. The animals could also be attracted to the plastic, which many marine critters eat and use as habitat.

By continuing to monitor the site, researchers hope to learn how the community changes and recovers from underwater construction. “As time goes on, we would expect to see some impressive animals, such as deep-sea corals and sponges, growing on the structure. Knowing how long this process takes would be really valuable,” Jones says in a press release.

Additionally, the team hopes to collect specimens from the site and expect to discover new species. “It is generally not possible to identify animals in images to species level, as you can’t see their important distinctive details,” Gates says in a press release. “We expect that some of the animals living in the area will be new to science, and by making collections we would be able to determine and describe the species found.”