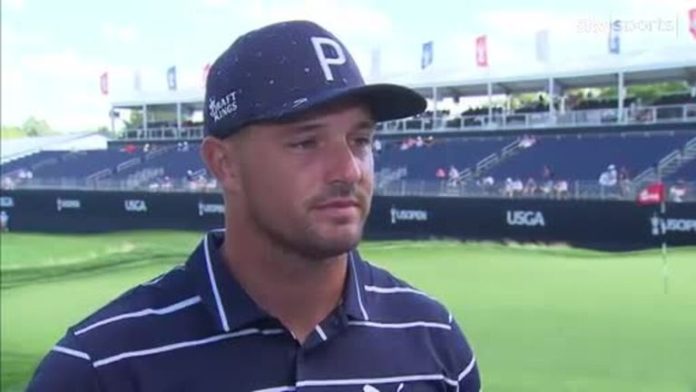 “There was a lot of financials to it and a lot of time. I get to have a life outside of golf. It’s a business decision for my family’s future, and it gave me a lot of free time, so it cleared a lot things up for me. It’s not my decision to make [PGA Tour suspension]” – DeChambeau

Bryson DeChambeau said he made “a business decision, first and foremost” in joining LIV Golf, despite the looming and promised threat of being suspended from the PGA Tour.

“There was a lot of financials to it and a lot of time. I get to have a life outside of the game of golf as well,” DeChambeau said on Monday ahead of this week’s US Open in Brookline, live on Sky Sports.

Amid reports the 28-year-old DeChambeau was offered a guaranteed $100m to join the Saudi-backed tour, which has Greg Norman as CEO, DeChambeau called the move “a business decision for my family’s future, and it gave me a lot of free time, so it cleared a lot things up for me.

“I think we’ll have a new legacy.

“It was very difficult. It’s been weighing on everybody out here for the past couple of years.

“For me, what’s gone on has not been great but they [Saudi Arabia] are moving in the right direction from what I can see and what we’ve had conversations about.

“I would love to play PGA Tour events when they would allow me to.”

DeChambeau, an eight-time winner on the PGA Tour, including the 2020 US Open, said he intends to play the final seven LIV Golf events this year. His debut will come on June 30 at Pumpkin Ridge in Portland.

With PGA commissioner Jay Monahan having already suspended 17 tour players for taking part in the first LIV event, and at least half of that group having resigned their PGA Tour membership, DeChambeau knows he could be sidelined as well.

“It’s not my decision to make. That’s someone else’s decision that’s making that for me,” DeChambeau said, making his first public comments since LIV Golf announced his membership.

Monahan made it clear other players who go the LIV route would be suspended as well, although DeChambeau said he has not resigned his PGA Tour membership and hoped to keep playing on the tour.

He said he has pulled out of next week’s Travelers Championship because of the distraction his presence could cause.

Phil Mickelson and Dustin Johnson are among the 17 players already suspended from the PGA Tour.

Mickelson: I have deepest sympathy for 9/11 families

Mickelson insists he has “the deepest of sympathy and empathy” for the families of the 9/11 victims and those who survived the New York terrorist attacks in 2001 after he was criticised by them for joining the LIV Invitational Golf Series.

The competition is bankrolled by Saudi Arabia’s Public Investment Fund (PIF) which has led to Mickelson and the other Americans who joined the series being accused of “betraying” the victims in a strongly-worded letter from a prominent support group.

In citing Saudi Arabia’s prominent role in the terror attack – Osama bin Laden and 15 of the 19 hijackers were Saudis – Terry Strada, the chair of 9/11 Families United whose husband died in the attacks, wrote: “Whether it was the appeal of millions of dollars of hard cash, or just the opportunity to prosecute your professional grievances with the PGA, you have sold us out. This is a betrayal not only of us, but of all your countrymen.”

Mickelson was asked to explain his decision at an awkward press conference ahead of this week’s US Open at The Country Club in Brookline and expressed his sympathy, although he refused to say whether he would speak to the families directly.

“I would say to the Strada family, I would say to everyone that has lost loved ones, lost friends on 9/11 that I have deep, deep empathy for them. I can’t emphasise that enough,” he said.

“I have the deepest of sympathy and empathy for them.”

Round-the-clock coverage from the US Open is live on Sky Sports this week, with over 40 hours of live action from the four tournament days. Watch live on Thursday from 1pm on Sky Sports Golf!