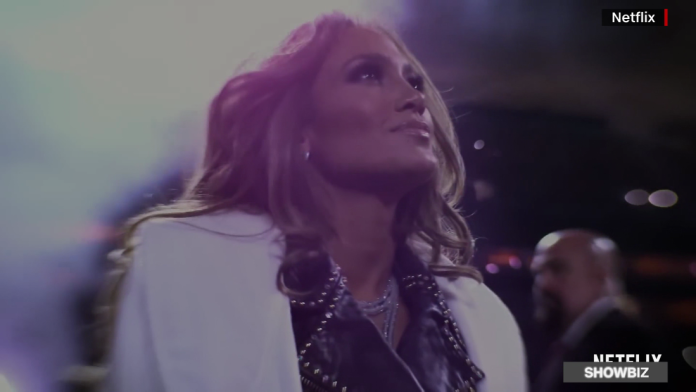 The Netflix presentation certainly celebrates Lopez as a multi-dimensional star, one who overcame second guessing and the customary media barriers to shine as a singer, dancer and actor. In the period documented, she’s riding particularly high, receiving rave reviews for her work in the movie “Hustlers” while preparing to headline the Super Bowl halftime show, which is actually a rather strange anchor for this wide-ranging look at her.
“My whole life I’ve been battling and battling to be heard, to be seen, to be taken seriously,” Lopez explains, calling the Super Bowl showcase “an incredible opportunity to show the world who I am.”
Yet a major part of “Halftime” hinges on the fact that the whole world knows Lopez, or at least feels as if they do, through her multi-faceted career, her frequent coverage in the tabloids and a high profile that has made her fodder for latenight comedians — an appetite for her personal life, she laments, that at times has “overshadowed my career.”
If that last indignity, and the shallow focus on what she wears and who she dates, could arguably be perceived as something that goes with the territory for someone this famous, Lopez makes clear that she’s extremely sensitive to criticism, good or bad. At one point she even tears up seeing some of the praise heaped upon her for “Hustlers,” which she also produced.
Presented such a target-rich subject, director Amanda Micheli seemingly tries to cover too much ground, touching on interesting interludes without fully developing them. It would be nice to see more detail, for example, about Lopez’s clash with the NFL over the political commentary incorporated into the halftime show, or her conflicted feelings about awards campaigning (there’s an inordinate amount of emphasis on the Golden Globes), and less of a whole lot else.
Indeed, while Lopez contends that the creative process around her shows can be “messy,” this behind-the-scenes access is actually closer to boring. Given the buildup, the halftime show itself is also poorly presented in the editing, giving a taste of the spectacle that frankly feels like an awfully long time ago.
At one point, Lopez acknowledges that she has “lived my life in the public eye,” which exhibits a gift for understatement. “Halftime” offers her a forum to control that narrative, but in a way that makes it possible to admire her accomplishments without necessarily wanting to sit through the whole show.
“Halftime” premieres June 14 on Netflix.