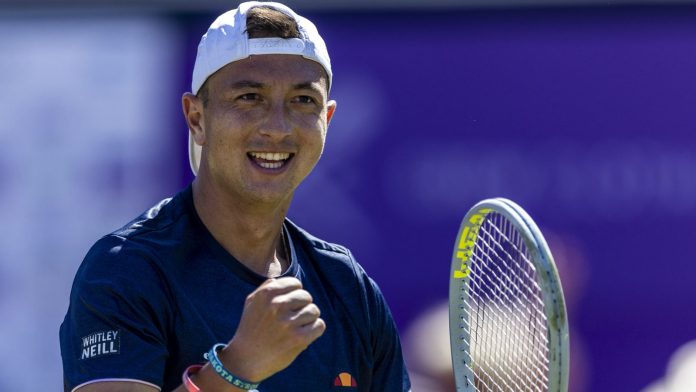 Southend tennis star Ryan Peniston celebrates the news he has received a wild card for Wimbledon by upsetting top seed and world No 5 Casper Ruud at Queen’s Club; “It’s a bit unreal. I’ll need a bit of time to process it”

Britain’s Ryan Peniston enjoyed a dream Queen’s Club debut by knocking out the top seed and world No 5 Casper Ruud, while Dan Evans was knocked out by defending champion Matteo Berrettini.

It was only the seventh time the top seed has lost an opening-round match at Queen’s in the open era, with Peniston consigning Ruud to an illustrious list which also includes Andy Murray, Pete Sampras and Jimmy Connors.

He said: “I can’t really believe it, it feels like a dream. I didn’t get much sleep last night, it doesn’t feel real. I’ve been playing well.

“Obviously Casper is an unreal player, he did so well at the French Open so I knew it was a tough ask, but you have to step on the court knowing you’ve got a chance to win – so that’s what I did.

“It’s a bit surreal, four or five years ago I was sitting over there watching. It’s a bit unreal. I’ll need a bit of time to process it.”

It was the perfect way for the University of Memphis alumni to celebrate the news he has received a wild card for Wimbledon.

With Andy Murray withdrawing through injury and national No 1 Cameron Norrie knocked out on Monday, the unlikely pair of Peniston and 20-year-old Jack Draper are the only Brits through to the second round.

Next Peniston faces Argentina’s world No 46 Francisco Cerundolo, while Draper’s second-round opponent was confirmed as qualifier Emil Ruusuvuori, the world No 56 from Finland.