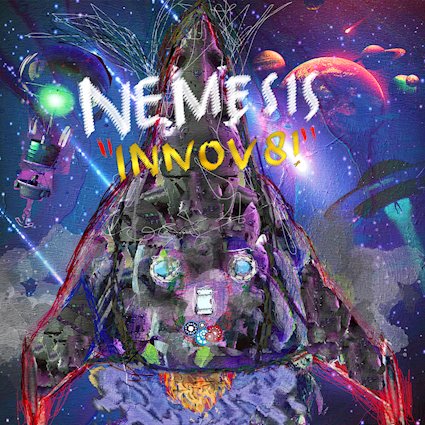 With a vocal timbre similar to Lady of Rage crossed with Latifah and a spit game comparable to early 00s Nas, Nemesis earned her moniker the old fashioned way: in rap battles. Now a formidable force and ready to remind hip hop of its spiritual power, Nemesis has released her second single “INNOV8!” and if getting read for a third with the aim of combating pop hop and bringing the genre back to what it once symbolized for her and many other rap lovers. If anyone can make an impact on mumble rap, after all, it’s a good Nemesis.

Nemesis’s first single “Nefertiti the First” released in 2018 and gave audiences an idea of what she’s capable of, both in terms of skill and content. With a fast, rolling flow backed by smooth, soulful beats a’la early Common or Slum Village, this first single is not just a hearkening back to the golden age of hip hop but to the power of art, beauty and the kingdoms of Africa. It’s a call to action for her contemporaries and colleagues: style and substance can exist together and, in fact, that’s what makes the impact or true rap.

Now having signed on to partner with fellow SoCal MC God’s Gift to run the equally expansive label Pure Order, fans can expect Nemesis to speed up production on her own work as well. Her most recent single “INNOV8!” dropped in April and her next offering “Tigress” is due to release this Friday. Beat-wise, “INNOV8!” reaches even farther back in hip hop’s history as the Slick Rick/Digital Underground-style beats hit on second one of this dancier but also somehow even more lyrically expansive track as compared to “Nefertiti the First.”

With Nemesis channeling her inner Neneh Cherry and MC Lyte for this dancefloor vibe, “INNOV8!” is also a call to action for would-be rappers as well as anyone who needs a bit of leveling up. The catchy hook “thoughts plus beats equals innovate” both belies and summarizes the spiritual intent of the track. She’s not wrong either; no matter what the genre, if you’ve got an idea and a beat, you can make something innovative. That’s just scratching the surface as well; “INNOV8!” is packed with inspiring and mind-bending verse, all perfectly spit in a flow that rivals many of the greats. Said flow is fast, but luckily Nemesis and Pure Order have made a lyric video that’s just as fun and funky as the track:

The next single in what looks to be a series from Nemesis is “Tigress.” This track was released previously but since hooking up with Pure Order, Nemesis decided to give it a remaster of the original, produced by OhNo the Disrupt with the help of DJ Romes. It was a good idea to re-release this track as it’s another testament to Nemesis’s range of styles and vocal flexibility. With smooth, Wu Tang-style vibes, Nemesis again reaches into the deep, powerful registers of her voice to drive home to power of her lyrics.

With a noble mission of restoring hip hop to its former glory while elevating hearts and minds, Nemesis has a long road ahead of her. With the backing of a like-minded label, incredible talent and skill and a solid understanding of where she wants to go from here, however, this powerful artist has what it takes to complete that mission, bringing ever more expansive and well-written hip hop to a genre that desperately needs that innovation. If anyone is capable of doing it, it’s this “Tigress.”

Check out “Nefertiti the First” and “INNOV8!” on multiple platforms now by clicking here and be sure to watch the Pure Order YouTube channel on Friday for the drop of “Tigress.”

Adani will ask Big 4 accounting firm for a ‘general audit,’...

Offices are more than 50% filled for the first time since...

‘It turned bad in an instant’: CNN crew has close call...