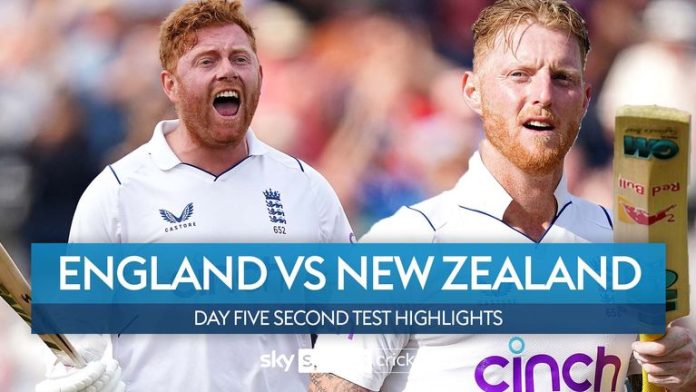 England promised they’d go for it, that no target would be great enough to curb their new-found attacking mindset. And boy did they deliver on that promise.

Set a challenging 299 in 72 overs to win the second Test at Trent Bridge, and the series, England didn’t just reach their target, they obliterated it – courtesy of one of the greatest-ever hundreds in Test cricket.

Jonny Bairstow smashed a simply staggering 136 off 92 balls in the afternoon sunshine in Nottingham, a tea-time ‘ham and cheese toastie’ apparently the fuel for an astonishing assault that propelled England from 139-4 at the interval – the game very much still in the balance – to victory a mere 16 overs later.

Bairstow hit seven sixes, all of them coming in the evening session, along with 10 of his 14 boundaries, as he threatened to break Gilbert Jessop’s 120-year record for the fastest-ever Test century for England. He’d ultimately reach his ninth Test century one ball shy of that mark, doing so in just the 77 deliveries.

The devastating display of hitting had “echoes of the 2005 Ashes game at The Oval, when Brett Lee went at Kevin Pietersen with the Ashes on the line,” said Sky Sports’ Michael Atherton.

On that occasion, England were 127-5 at lunch on day five, with a lead of 133, needing to bat out the day in order to regain the Ashes for the first time in 18 years. Pietersen, 35 not out at the time, was peppered by short balls in a blistering spell of short-pitched bowling after lunch by Lee and decided to take him on, smashing two sixes and four fours from his next three overs to change the game.

“KP was wondering do I stick or twist and thought, ‘I’m going to go for it’. Bairstow was the same,” Atherton added. The difference being, Bairstow didn’t target just one of the New Zealand attack, no bowler was safe.

England, and the gobsmacked masses watching on in the stands, will no doubt have anticipated a nervier finish – 27 runs required from a nail-biting final 26 balls, perhaps. But when Bairstow was finally dismissed, edging the brilliant Trent Boult behind, that equation was in fact 27 from 26 overs!

“That is truly one of the great Test match hundreds seen anywhere,” Nasser Hussain said on commentary. And it would have to be in order for Ben Stokes, of all people, to play second fiddle, despite cracking four sixes and 10 boundaries of his own in an unbeaten 70-ball 75.

Fittingly, the captain was there to hit the winning runs, cut away for four à la Headingley 2019, to rubber stamp the arrival of his new era. From one win in 17 Test matches, England now have two in two matches – against the reigning World Test Champions no less.

What a difference a year makes. When England played New Zealand at Lord’s last summer, a timid, cautious approach took over when presented with a similar equation.

Set 273 from 75 overs to win on the final day, England showed no appetite whatsoever for the run chase, with Dom Sibley’s defiant dead-batting of 207 deliveries a far cry from the entertainment served up at Trent Bridge.

Then-skipper Joe Root and then-coach Chris Silverwood perhaps felt a side routinely shredded in India at the back-end of the previous winter, and shorn of an out-of-favour Bairstow and Stokes to injury, had no chance of pulling off such a spectacular victory as Tuesday’s.

Perhaps they wanted to instil a steely resilience in the side, for them to learn how to not lose. And if that was indeed the motivation, it is certainly not at the forefront of Stokes’ and new head coach Brendon McCullum’s agenda – not only evident by events on the field during their first two games in charge, but by those off it.

“Learn to draw games? No, that’s not what I’m going to be doing,” Stokes told Sky Sports’ Ian Ward when asked if England’s newest pairing could learn from the example of former captain and coach combo Hussain and Duncan Fletcher, whose first objective was to make the side hard to beat.

In his unveiling as captain, Stokes also spoke about his desire for his team to comprise of “selfless cricketers who make decisions based on winning games”. McCullum, meanwhile, said he wanted to eliminate what he viewed as an “English fear of failure” when he was presented to the media for the first time.

McCullum added that Test cricket was in “big trouble” if England were not “competitive and watchable”.

“I think Test cricket has been on a slightly downward path and the only people who can change that really are England,” he said.

“They have a real opportunity to make significant change and hopefully inspire the next generation of cricketers to want to play Test cricket rather than just T20 or the shorter forms of the game.”

This England side seized that opportunity in the most emphatic manner possible on Tuesday afternoon at Trent Bridge, with the sensational action witnessed by a capacity crowd that had been offered entry for free. What Stokes’ men delivered for them was truly priceless.

“Having talked the talked, Ben Stokes has definitely walked the walk in the middle,” Hussain said after England’s series-clinching victory.

And what next for this new era? “We’re going to come even harder. That’s our mentality at the moment,” said Stokes.

Bring on the third Test at Headingley.

Watch England take on New Zealand in the third Test, from Headingley, live on Sky Sports Cricket and Sky Sports Main Event from 10am on Thursday, June 23.