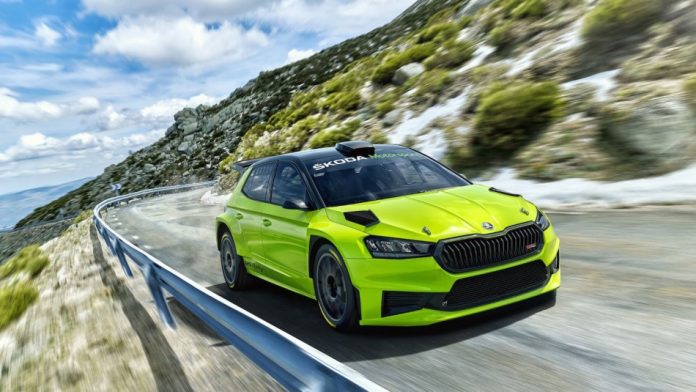 The new Fabia RS Rally2 was unveiled last evening (Tuesday 14 June) and is the successor to the hugely successful Fabia Rally2 – which secured 1,710 rally wins worldwide at the hands of various drivers, including Andreas Mikkelsen and Kalle Rovanperä.

The Fabia RS Rally2 is based on ŠKODA’s fourth-generation Fabia road car. It benefits from a host of upgrades in almost every department.

Its 1.6-litre turbocharged engine puts out close to 289bhp and 430Nm torque via a five-speed sequential gearbox with drive to all four wheels.

A number of improvements have been made to its braking system, while a large focus also went into the bodyshell – which features 35.8 metres of steel tubing for the roll cage as well as better weight distribution.

The car has already completed a comprehensive testing programme and is expected to hit the stages in the near future.

“Standing still means going backwards, and this is especially true in motorsport. That’s why, in developing the new Fabia RS Rally2, we applied the experience we gained from the predecessor model and optimised every detail,” said Michal Hrabánek, head of ŠKODA Motorsports.

“The aim was to improve the most successful rally car in the world. I’m proud of the entire ŠKODA Motorsport team who have pursued this goal with great dedication. I would also like to thank our colleagues in Series Development; the fourth-generation Fabia provided us with a perfect basis for the Fabia RS Rally2.”