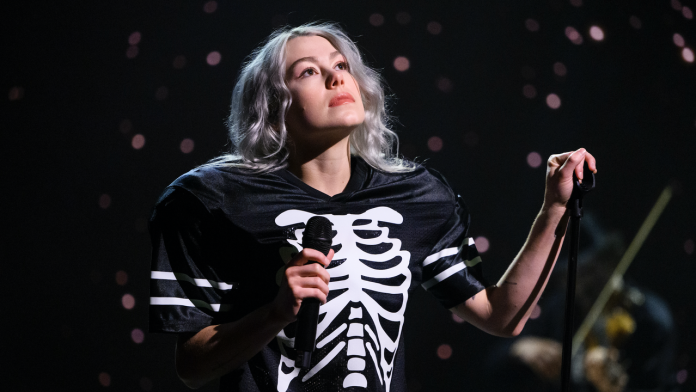 Phoebe Bridgers stopped by The Tonight Show Starring Jimmy Fallon on Wednesday night (June 15), performing her song “Sidelines” in a skeleton-laden football jersey. She originally released the track back in April for Hulu’s series Conversations With Friends. Watch the performance below.

Bridgers is currently on an extensive 2022 tour of North America and will embark on a European string of shows starting next week. She’s also slated to perform at a number of music festivals this summer, including Glastonbury, Roskilde, NOS Alive, and This Ain’t No Picnic.

After releasing her sophomore album Punisher in June 2020, Bridgers followed it up that fall with her Copycat Killer EP. Since then, she has covered Tom Waits’ “Day After Tomorrow” as well as Elliott Smith’s “St. Ides Heaven” with Bright Eyes. She also dropped a music video for “Sidelines” after debuting it at Coachella, launched a monthly SiriusXM show called Saddest Factory Radio, and opened up about her own abortion experience.

Skrillex teams up with Nai Barghouti for fifth single of the year, “Xena”

Future, Missy Elliott, the Roots, Glorilla, and More to Perform During 50th Anniversary of Hip-Hop Celebration at 2023 Grammys