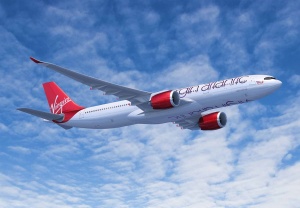 Virgin Atlantic has marked the launch of its new direct services to Austin, the capital of the Lonestar state of Texas, and the airline’s first new route to the US since 2017.

The VIP group on board flew over in style with a special Tex-Mex themed in-flight service and will spend three days in Austin exploring the city as well as unveiling a mural by Austin’s acclaimed artist, Mike Johnston, to commemorate the new connection in Downtown Austin.

Sir Richard Branson, President of Virgin Atlantic and Founder of Virgin Group said:  “It’s an honour to be here to welcome Virgin Atlantic’s very first flight to Austin. They say everything is bigger in Texas and I’ve found that to be true with the entrepreneurial spirit, creativity and innovation that has emerged from this great city. We are looking forward to providing a stronger connection between Austin and London. We are already seeing a lot of interest from people in the UK wanting to visit Austin, and vice versa! Austin is a fantastic addition to Virgin Atlantic’s route network.”

Juha Jarvinen, Chief Commercial Officer at Virgin Atlantic commented: “Seeing our aircraft touch down in Austin today fills me with great pride and is a momentous occasion as it represents Virgin Atlantic’s new phase of growth.

“Austin is our first new US route since 2017 and we know it’s impressive food, arts and music scene has already caught the eye of our customers. We’ve seen a huge demand for bookings and as a result, we’re happy to confirm that the route will increase to a daily service from Spring 2023.

“There are so many synergies between Virgin Atlantic and the city of Austin. We love the philosophy and desire to celebrate local brands, businesses and communities and we’re delighted to welcome customers, both existing and new onboard, to explore this fabulously quirky city.”

Mookie Patel, Chief Business and Finance Officer at Austin-Bergstrom International Airport said: “AUS is thrilled to welcome Virgin Atlantic to Austin and Central Texas. This exciting new partnership is reflective of our airport’s continued recovery from the impacts of the pandemic and furthers our commitment to be the ‘Gateway of Central Texas’ for both leisure and business travelers. This type of investment in our airport, offering more nonstop services to sought-after destinations such as London, is an important and powerful investment in our community – it gives an Austinite more chances to travel to global destinations, experience new cultures and places, and connect with loved ones and meet new people.”

Virgin Atlantic is a purpose led airline and is committed to championing the individuality of its people on the ground and in the air. Recently Virgin Atlantic relaxed its tattoo policy, becoming the first UK airline to allow visible tattoos for its front-line crew. This builds on the airline’s uniform and make up policy which allows crew to have the choice whether to wear make-up or not, as well as offering female crew the choice to wear trousers and flats, or skirts and heels.

Virgin Atlantic flies from London Heathrow to Austin four times a week on the airline’s 787-9 aircraft boasting 31 Upper Class, 35 Premium and 192 Economy Delight, Classic and Light seats. Due to strong demand, this will increase to daily from Spring 2023.