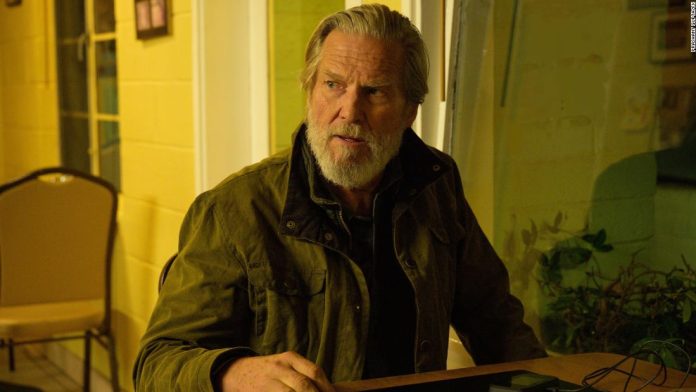 Bridges’ CIA operative Dan Chase has been in hiding for years, living off the grid for reasons that gradually begin to come into shape through flashbacks. (Bill Heck plays him as a younger guy, engaged in covert action in the Middle East.)
It takes a lot to bring him out of retirement, but he’s prepared when that happens, with Lithgow’s world-weary spy chief, Harold Harper, knowing full well that rounding him up is going to be more difficult than his subordinates assume. Just to extend the “Robin and Marian” analogy, Harper is very much like the Sheriff of Nottingham in that 1976 classic, assigned to hunt this character down but taking no pleasure in the prospect, and irritated by the young hotheads upon whom he must rely.
“You aren’t the guy you remember,” Harper warns Chase by phone, hoping to avoid the worst of it.
He isn’t, but he’s still resourceful and plenty dangerous, along with his very loyal dogs, as those sent to neutralize him discover. Indeed, “The Old Man” (based on Thomas Perry’s book, and adapted for TV by “See’s” Jonathan E. Steinberg and Robert Levine) features an inordinately brutal fight scene, in part because there’s nothing pretty or choreographed about it. When Chase warns his daughter, “You don’t know how ugly these things can get when they get ugly,” he isn’t kidding.
The limited-series format brings with it some of the usual disclaimers, including the fact that the show takes its time getting to the meat in the four episodes previewed, including a detour involving Amy Brenneman as an innocent bystander drawn into this perilous world. Yet Bridges (whose health issues and battle with cancer add a rather poignant real-world aspect to the proceedings) proves greatly effective as the gnarled spy — think Jason Bourne if he lived long enough to qualify for AARP membership.
There’s nothing particularly novel about the scenario, but nor does there really need to be. Because while Chase might not be the guy he remembers being, in terms of holding an audience’s attention, Bridges and Lithgow put this “Old Man” in good hands.
“The Old Man” premieres June 16 on FX and on Hulu.