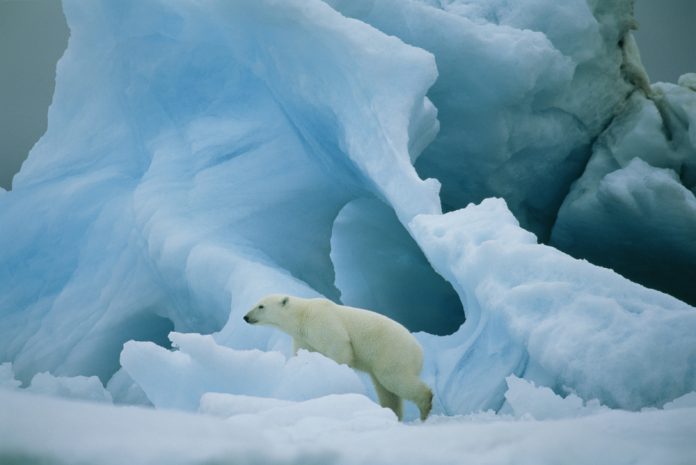 A recent study, published in Science, indicates that a population of polar bears could uniquely adapt to survive the decline of Arctic sea ice. For the last 40 years, the region has lost 13 percent of its ice cover each decade. That’s like removing a chunk of ice the size of Ireland every year. This threatens Artic animals like polar bears that rely on sea ice to feed.

The researchers reported a previously unstudied population of polar bears from southern Greenland – a region where sea ice can disappear for eight months of the year. These bears adopted a new feeding strategy to avoid starvation: feeding from freshwater ice coming from Greenland’s glaciers.

“We knew there were some bears in the area from historical records and Indigenous knowledge. We just didn’t know how special they were,” says Kristin Laidre in a press release, a polar scientist at the University of Washington’s Applied Physics Laboratory.

Polar bears typically ambush seals on floating layers of sea ice to feed. They feed plenty in the spring and early summer when vulnerable baby seals wean from their moms, but once the ice melts, they must fast until it returns. Fasting polar bears can survive for up to three to six months, but due to climate change, the time between feeding opportunities is exceeding that threshold.

To study the polar bears, the team worked with hunters to figure out where the bears lived. They tagged them and tracked their movement using satellites, and sampled DNA from the hunters’ catch.

By comparing the movement and genetic data to 30 years of historical data from northerly polar bear populations, the researchers discovered that the southern population in Greenland was behaviorally and genetically distinct from the northern ones.

The southern population live in fjords, steep and narrow inlets of water that glaciers form. They rely on glacial ice to feed when sea ice isn’t available.

Compared to typical polar bears, the bears from southern Greenland are relatively inactive. Typical polar bears wander about 24 miles (40 km) every few days, but the southern bears stay close to their fjords, moving only about six miles (10 km) in the same time span.

The southern bears also had a sense of home, often staying at the same fjord for years. Some of the polar bears got stranded on drifting chunks of ice and accidentally ended up 120 miles from home, but in each case, they found their way back within two months.

In addition to behaving differently, the southern polar bears were also genetically unique. Their DNA diverged from their northern neighbors, suggesting that the groups were not interbreeding. The team believes that the harsh geography of southern Greenland, with its steep mountains, vast ice sheets and charging rivers isolated the group several hundred years ago.

The southern polar bears seem well-equipped to deal with warming temperatures, but the authors warn that populations from other regions might not be so lucky.

Laidre, the study’s lead author, warns that other polar bears may not find the habitats that the southern Greenland polar bears rely on to cope with declining sea ice.

“We need to be careful about extrapolating our findings, because the glacier ice that makes it possible for Southeast Greenland bears to survive is not available in most of the Arctic,” Laidre says in a press release. “We still expect to see large declines in polar bears across the Arctic under climate change.”

Why a billionaire has stashed 300 vintage cars in the desert

Swimming in cash, Chevron plans a $75 billion slap in the...