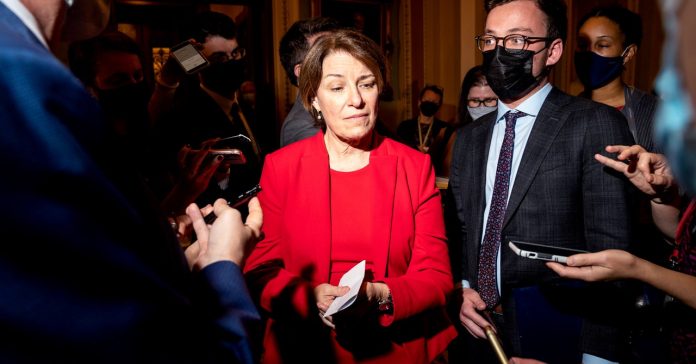 Opponents of the antitrust push targeting Big Tech have lobbed all kinds of arguments to try to weaken support for new legislation. They may finally have found one that sticks.

This week, a group of four Democratic senators led by Brian Schatz, of Hawaii, sent a letter to Amy Klobuchar asking her to pump the breaks on the American Innovation and Choice Online Act. The bill, which Klobuchar co-sponsored with bipartisan support, would prohibit the biggest tech companies from abusing their power to disadvantage businesses that operate on their platforms. But Schatz’s group argues that a terrible side effect is buried in the legislation. The bill, they claim, would prevent dominant platforms from enforcing their content policies, which in turn “would supercharge harmful content online and make it more difficult to combat.”

Here is what the bill says about content moderation: nothing. The relevant section says that a “covered platform”—the likes of Google, Amazon, Apple, Meta, or Microsoft—cannot “discriminate in the application or enforcement of the terms of service of the covered platform among similarly situated business users in a manner that would materially harm competition.” This does not appear to ban or limit content policies. It suggests, to the contrary, that platforms can continue to enforce their terms of service—just not in a discriminatory way. On its face, this means that a dominant platform can’t apply its rules unfairly against a company that relies on it to reach customers. If a new video-sharing app was eating into YouTube’s market share, for instance, this provision would prevent Google from selectively invoking some little-used policy to ban it from its app store.

If the bill doesn’t discuss content moderation, where did some people get the idea that it would nonetheless affect it? In part, it’s a talking point from an industry that isn’t shy about making creative arguments to defeat proposed regulation. But tech insiders aren’t the only ones making this claim. Last week, law professors Jane Bambauer and Anupam Chander published an op-ed in the Washington Post issuing much the same warning. On Wednesday, Chander, who teaches at Georgetown, walked me through the argument. Take what happened to Parler, the conservative-friendly “free speech” Twitter alternative. Last year, after the January 6 riot, Apple and Google banned Parler from their app stores, and Amazon AWS canceled its hosting contract. Parler sued but had no legal leg to stand on. (It eventually implemented a content policy and was allowed back into the app stores.) Under the new bill, however, a conservative state attorney general, like Texas’s Ken Paxton, would be able to sue the platforms, claiming that they discriminated against Parler because of its conservative affiliation.

Okay, but couldn’t the companies then simply say, “But this wasn’t discrimination: Here is the policy they violated, and here’s the evidence that they violated it”? Not so fast, Chander argues. It doesn’t really matter what Google or Amazon says; what matters is what a federal judge, and ultimately the Supreme Court, decides. And a lot of Republican-appointed federal judges might agree that tech companies are mistreating conservatives.

“Content moderation decisions are not clear up and down decisions,” Chander says. “It’s easy to cast those judgment calls as discriminatory, especially when you have judges who feel that their side is the one being discriminated against.” He adds, “Boy, are you handing the conservative judges on these courts a loaded weapon, knowing they’re going to be backed up by all the conservative Supreme Court justices.”

Apple missed the chance to turn the HomePod 2 into a...

US sec of state Blinken speaks with senior Chinese official over...