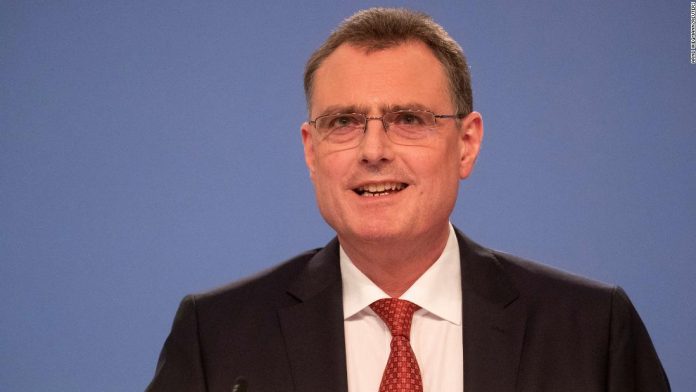 The central bank increased its policy rate to minus 0.25% from the minus 0.75% level it has deployed since 2015, sending the safe-haven franc sharply higher. Nearly all the economists polled by Reuters had expected the SNB to keep rates steady.
It was the first increase by the SNB since September 2007, and followed a 0.75 percentage point hike in borrowing costs by the US Federal Reserve on Wednesday.
Other central banks are also raising interest rates as they attempt to cool inflation driven higher by surging fuel and food prices that are straining budgets for households and businesses.
The Bank of England raised UK interest rates by a quarter point on Thursday.
The European Central Bank signaled last week it would hike in July to check euro zone inflation that hit 8.1% last month.
SNB Chairman Thomas Jordan said rising Swiss inflation — which hit its highest level in nearly 14 years in May — meant the central bank may have to act again.
Even after Thursday’s 0.5 point rate rise, the SNB expects inflation in the first quarter of 2025 to reach 2.1%, outside its target for a rate of 0%-2%. In 2022 it expects a rate of 2.8%.
“Without today’s SNB policy rate increase, the inflation forecast would be significantly higher,” Jordan told a news conference.
“The new inflation forecast shows that further increases in the policy rate may be necessary in the foreseeable future,” he added, declining to indicate when or by how much the SNB could raise again.
“We are not in the business of very precise forward guidance, but … at the end of our forecast horizon inflation will again go over 2% so we have to see what measures are necessary,” Jordan said.

Analysts expect more hikes in the quarters ahead.
“Going forward, the monetary policy message is on the hawkish side,” said Gero Jung, an analyst at Mirabaud Asset Management. “For SNB economists, the Swiss franc is not over-valued anymore; second, inflation is expected to be above the limit that is associated with price stability in Switzerland.”
David Oxley at Capital Economics said it was likely the SNB will raise rates again, to zero or even into positive territory, before its next scheduled meeting in September.
Karsten Junius, an economist at J Safra Sarasin, expects the SNB to raise rates at its next four quarterly meetings by 25 basis points apiece, before pausing. “We would not rule out a 50bp hike at its next meeting in September either,” he said.
The SNB said Thursday’s rate increase was necessary to check rising prices in Switzerland, which had spread to goods and services previously unaffected by the impact of the war in Ukraine and supply chain bottlenecks linked to the pandemic.
Price rises were being passed on more quickly than before, Jordan said, and action was necessary to prevent inflation becoming entrenched. “It would be negligent not to take the inflationary development into account,” he said.
The recent depreciation in trade-weighted terms meant the Swiss franc was no longer highly valued on currency markets – long a concern for the SNB.
The bank said it was ready to intervene in markets to check excessive appreciation or weakening of the currency.
Switzerland’s labour union federation criticised the rate hike, saying the SNB was allowing the strong franc to rise further, putting jobs and wages at risk.