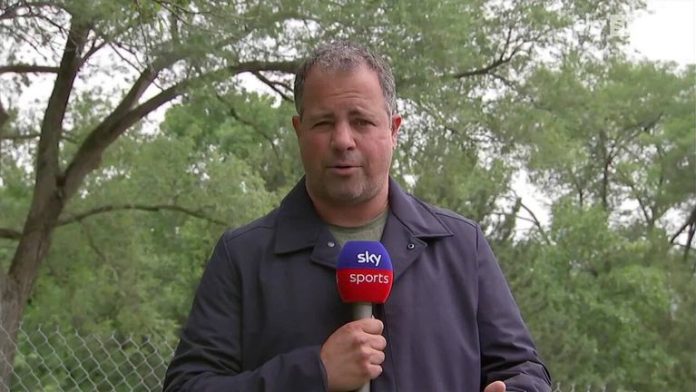 The FIA has introduced new regulations for Formula 1 teams after several drivers, including Lewis Hamilton, were left in pain following last weekend’s Azerbaijan GP; watch the Canadian GP live all weekend on Sky Sports, with the race starting at 7pm on Sunday

Following the FIA’s introduction of new rules in an attempt to combat the bouncing of Formula One cars, Sky Sports F1’s Ted Kravitz explains how the changes could impact the rest of the 2022 season.

The severe bouncing of cars has been an unexpected issue following the introduction of F1’s all-new design regulations for the current campaign, with Mercedes one of the worst impacted teams.

Lewis Hamilton has complained about the problem throughout the season, but with the bumpy Baku street circuit at last weekend’s Azerbaijan GP exacerbating the issue and leaving the seven-time world champion in severe pain after the race, F1’s governing body has taken action.

The technical directive issued by the FIA ahead of this weekend’s Canadian GP will force teams struggling with bouncing to alter the setup of their car to protect their drivers, with a limit on the level of “vertical oscillations” being introduced.

The FIA did not confirm whether the rules would be implemented in Montreal, with the announcement made little more than 24 hours before Friday’s opening practice session at the ninth Grand Prix of the season.

Sky Sports F1 Ted Kravitz explains how he expects the rules to impact performance on the track.

‘Surprising intervention not the one Mercedes wanted’

It’s quite a surprise because Mercedes have been spending the last couple of weeks and races saying that something should be done to address the bouncing issues, the porpoising of the cars, which is an aerodynamic phenomenon.

Actually, at the last race, it wasn’t the aerodynamic phenomenon. It was the fact that Mercedes were running their cars very low to the ground and the cars were hitting the track when they hit some bumps.

So what Mercedes were wanting to hear from the FIA, was some kind of rule on maybe everybody raising their cars up so that the drivers wouldn’t get a bad back.

Instead, what they got from the FIA, is almost a taskforce, a technical directive addressing the people whose cars are bouncing, namely Mercedes.

So this is working against Mercedes and this could have a very negative effect on Lewis Hamilton’s season. Based on what they’re saying, the FIA are going to look at ways of stopping the porpoising, on the Mercedes all that means is raising the car up so that the car doesn’t hit the ground any more and cause a pain in the back any more to Lewis Hamilton and George Russell.

So that’s the reaction that we’re having here in Canada to what’s been really a surprising intervention by the FIA and not one that Mercedes were after.

At the front of the field, this is really going to hand an advantage, I think, to Red Bull because they never had any issues with porpoising, whereas Ferrari have done.

And it looks like Red Bull are not only in command on pure pace on the track with Ferrari’s unreliability, but now it looks like this latest technical directive will go in Red Bull’s favour, potentially against Ferrari if they have to suffer any bouncing problems that they’ve encountered off and on throughout the last few races.

In the midfield, the McLaren in Baku seemed to be running very low to the ground and that caused Daniel Ricciardo some pain in his back.

You might see people who don’t suffer so much from this, Valtteri Bottas in the Alfa Romeo, maybe the Aston Martins of Sebastian Vettel and Lance Stroll, actually leapfrog them and it could be advantageous.