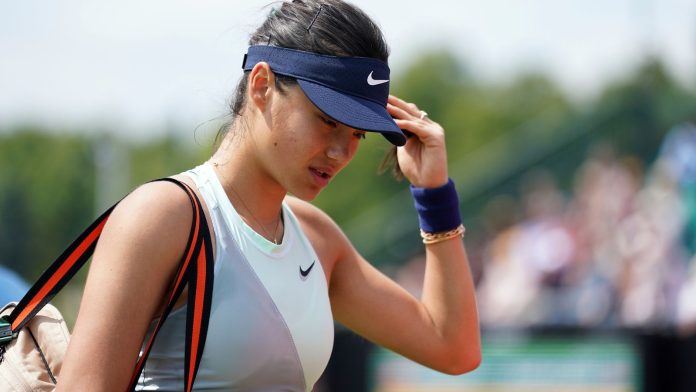 The British No 1 saw her preparations for Wimbledon hit last week when she suffered an injury to her side in Nottingham; Raducanu became the youngest British women to reach the last 16 of Wimbledon in the Open Era last year

Emma Raducanu is not among the wild cards for the Rothesay International Eastbourne, meaning the British No 1 could now head to Wimbledon with just seven games of competitive preparation on the grass.

The British No 1 is in a race against time to be fit for Wimbledon suffering an injury to her side in Nottingham and was forced to retire from her first-round match against Viktorija Golubic.

Raducanu managed to get through only seven games before she was forced to stop, which sparked speculation she would enter the Devonshire Park event to get some time on grass ahead of her Wimbledon return.

The US Open champion had until 4pm on Friday to accept a wild card to enter the Eastbourne tournament, which gets under way on June 20, but the 19-year-old has opted against doing so.

She may instead opt to play a match at the Giorgio Armani Tennis Classic exhibition at the Hurlingham Club next week but, assuming she is fit, will go into her home Grand Slam with very limited grass-court preparation.

Ryan Peniston and Katie Boulter have been rewarded for their strong performances this week at Queen’s and Birmingham, respectively, with wild cards alongside Harriet Dart, Jodie Burrage, Jack Draper and Jay Clarke.

Cameron Norrie and Dan Evans were the automatic British entries, while the headline act of the week will be the returning Serena Williams, who is playing doubles with Ons Jabeur.

Raducanu sustained the injury at Nottingham which was the latest in a string of fitness concerns for the world No 11, who has struggled to adapt to life on the WTA Tour since her remarkable Grand Slam win back in September.

It was at last year’s Wimbledon where Raducanu burst onto the scene with victories over Vitalia Diatchenko, Marketa Vondrousova and Sorana Cirstea to become the youngest British women to reach the last 16 of the tournament in the Open Era.

After her exploits in London, the teenager managed to produce one of the biggest shocks in sporting history with success at the US Open after initially coming through qualifying.

Raducanu has not had such a big impact at the Grand Slams this year with second-round appearances at the Australian Open and Roland Garros but expectation was high ahead of her Wimbledon return.