Home Culture Kit Harington is reportedly on board for a Jon Snow ‘Game of... 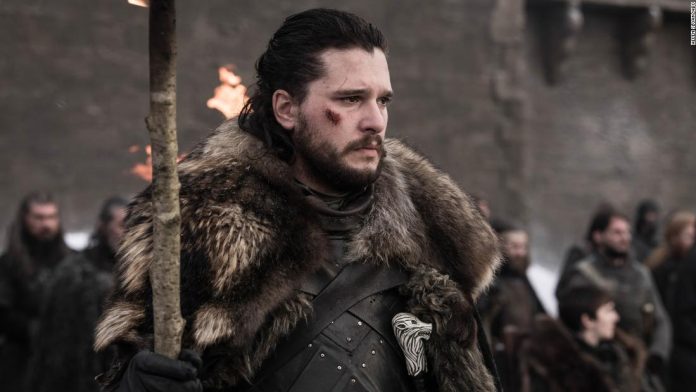 According to the Hollywood Reporter, a sequel to HBO’s hit fantasy drama is in early development, with British actor Kit Harington set to reprise his role as the world’s favorite bastard from the North turned heir to the Iron Throne.
Described as a live-action spin-off series, the Jon Snow-centered show is expected to take place after the events of “Game of Thrones,” which ended in 2019 after almost a decade.
HBO declined to comment. Representatives for Harington did not immediately respond to request for comment.
The reopening of Jon Snow’s story would upend the divisive eighth-and-final season and provide a chance for viewers to learn the fate of the surviving characters in the Emmy-winning series. Jon Snow was last seen leaving traveling north beyond The Wall with the wildlings, after being exiled from Westeros.
A sequel series could also open the door for the return of other familiar faces, including Jon Snow’s half-siblings Sansa and Arya Stark, played by Sophie Turner and Maisie Williams. It would also be a sign that HBO will extend George R.R. Martin’s GOT universe beyond the source material. (Like CNN, HBO is a unit of Warner Bros. Discovery.)
News of the possible Jon Snow spin-off comes ahead of the premiere of the franchise spin-off “House Of The Dragon” on August 21 on HBO. The 10-episode series, set 200 years before “Game Of Thrones,” is based on Martin’s “Fire and Blood” novel and follows House Targaryen, the dragon-riding family from which Daenerys Targaryen descended.
Harington was nominated for two Emmys, for best supporting actor and best lead actor in a drama series, during his time on “Game of Thrones.” He has since appeared in the Marvel Cinematic Universe, playing Dane Whitman in “Eternals,” appeared in an episode of Amazon’s “Modern Love” and starred in the title role in Shakespeare’s “Henry V” at London’s National Theatre.