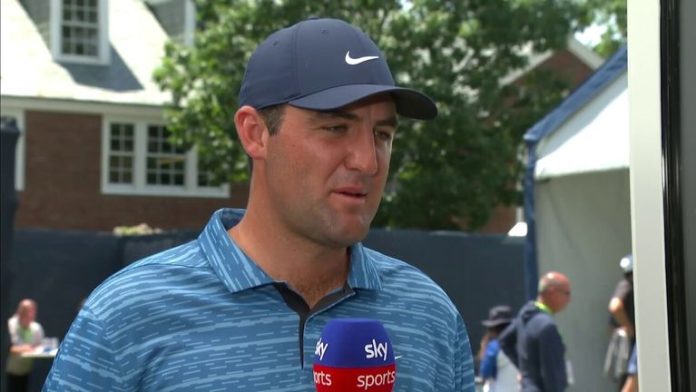 Scottie Scheffler and housemate Sam Burns share in the joint-best rounds on Friday morning as both return scores of 67 to sit three under and two under for the tournament, respectively – watch the US Open live this week on Sky Sports Golf

World No 1 Scottie Scheffler says he’s happy to fly under the radar as he attempts to win his second major at The Country Club in Brookline this week.

Scheffler, who won The Masters earlier this year, hit a three-under round 67 on Friday to give him a tie for the clubhouse lead at three-under for the championship.

Scheffler, having failed to make the cut at the PGA Championship, and with the LIV Golf saga dominating the sport leading up to the US Open, was asked if it helped not having the spotlight on him.

“Yeah, I feel like I’m kind of an under-the-radar person,” Scheffler told reporters. “I don’t really feel like there’s much chatter going around with me.

“Rory won [the Canadian Open] last week, Tiger was at the PGA.

“I’ve been number one in the world for a while now, and it doesn’t really feel like it, so I kind of like just being under the radar. I can show up and do my thing and then go home and rest.”

Burns: Scheffler has motivated me to play better

Scheffler’s rest this week will come in the company of good friend Sam Burns, with the two sharing a house during the tournament.

Burns, who sits second on the FedEx Cup standings behind Scheffler, also shot a three-under 67 on Friday, but spoke of his frustration to sit one shot off his friend at two under for the week.

“I am a little upset he’s beaten me by one,” Burns said. “But yeah, it’s cool to see him playing well.

“Obviously he’s had a fantastic year, and it’s kind of motivated me to try to play a little bit better and try to keep up with him.”

Asked if there were any parts of Scheffler’s game that he tries to learn from, Burns added: “He’s really good at everything, but a little bit around the greens.

“I think trying to learn how he hits different shots and kind of how he approaches those shots. I’ve tried to learn from him on those.”

Scheffler didn’t initially appear set to make a run up the leaderboard on Friday, as he picked up back-to-back bogeys on the fifth and sixth holes, but he recovered with a birdie at eight before then adding two more and an eagle on the back nine.

“I just stayed really patient,” Scheffler said. “Two silly bogeys early in the round, but outside of that I hit it really good. I was in position most of the day.

“If a few more putts would have fallen in, it would have been a really special day. But three under was a good score for me.”

Speaking further on how he managed to turn his round around, the world No 1 said: “Sometimes I just need to kind of get woken up a little bit.

“I think using frustration for good versus getting angry is really helpful. Now more so I’m trying to use that anger to react towards that next shot and bring that focus up a little bit.”

Watch the 122nd US Open throughout the week live on Sky Sports. Live coverage continues on Saturday from 4pm on Sky Sports Golf and Sky Sports Main Event.