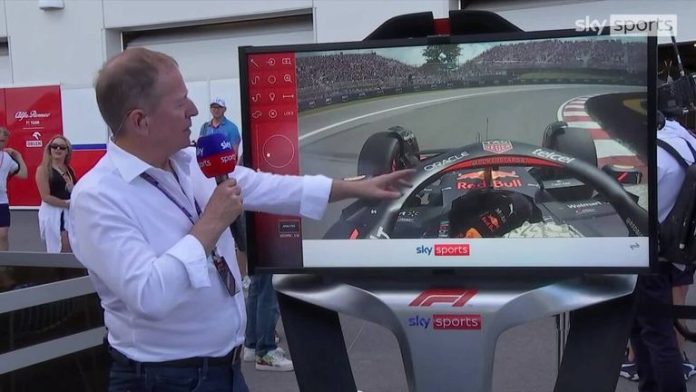 World championship leader Max Verstappen made a strong start to the Canadian GP weekend as he set the fastest time of the opening practice session in Montreal.

Verstappen, seeking to add to a run of four wins in his last five races, outpaced Ferrari’s Carlos Sainz by almost a quarter of a second at the Circuit Gilles Villeneuve, with Fernando Alonso taking third for Alpine.

Verstappen’s Red Bull team-mate Sergio Perez was fourth ahead of Ferrari’s Charles Leclerc, who many expect to take a new turbocharger at some point during the weekend that will see him incur a 10-place grid penalty for Sunday’s race.

George Russell was sixth, two places ahead of Mercedes team-mate Lewis Hamilton, with the Silver Arrows separated by Aston Martin’s Lance Stroll at his home race.

The session was the sport’s first since the FIA issued a technical directive in an attempt to combat the severe bouncing of cars that has occurred this season under the all-new design regulations for 2022.

The FIA are using this weekend’s practice sessions to gather data, with the sport’s governing body intent on introducing a limit to the level of bouncing drivers will be allowed to be subjected to.

Despite Leclerc’s protestations during Friday’s pre-practice press conference that an intervention from the FIA wasn’t required, it was his team-mate Sainz who suffered notable porpoising in the early stages of the session.

As has been the case throughout the season, it was Ferrari and Red Bull who battled for supremacy, with Sainz briefly going fastest before Verstappen produced a 1:15.158 to seal top spot.

There was limited opportunity for Ferrari or Perez to respond, with the threat of rain looming over Practice Two later on Friday meaning teams chose to use the final third of the session to carry out longer runs.

Despite strong winds, there was limited drama, with Alonso narrowly avoiding the ‘wall of champions’ early in the session, while his Alpine team-mate Esteban Ocon was forced to pit after debris caused his brakes to overheat.

Yuki Tsuonda, who will start the race from the back of the grid after taking his fourth engine of the season, escaped major damage after brushing the wall in the second sector.