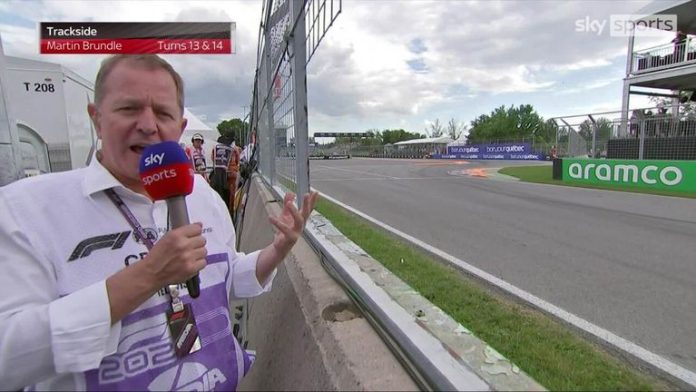 Max Verstappen topped the timesheet in both of Friday’s practice sessions; Charles Leclerc second amid speculation he will take a grid penalty for Sunday’s race; watch Practice Three live on Sky Sports F1 at 6pm on Saturday, with Qualifying following from 9pm

The world championship leader appeared in supreme form as he led Practice Two from almost start to finish at the Circuit Gilles Villeneuve, recording a 1:14.127 to beat Leclerc by almost a tenth of a second.

Leclerc, who will incur a 10-place grid penalty for Sunday’s race after taking new engine parts, was the only driver able to get near Verstappen, with his Ferrari team-mate Carlos Sainz more than a tenth further back in third.

Having pushed Verstappen hard in recent weeks, Sergio Perez was on this occasion no match for his Red Bull team-mate, more than a second off the Dutchman down in 11th.

Also struggling once more was Lewis Hamilton, with the seven-time world champion describing his Mercedes as “undriveable” as he finished 13th, while his team-mate George Russell was seventh.

Taking advantage of Perez and Mercedes’ struggles were former world champions Sebastian Vettel and Fernando Alonso, who impressed in taking fourth for Aston Martin and fifth for Alpine, respectively.

Pierre Gasly was sixth for AlphaTauri, while Lando Norris was edged out McLaren team-mate Daniel Ricciardo for eighth, with the other Alpine of Esteban Ocon rounding out the top 10.

It was another disappointing session for Valtteri Bottas, who struggled to set a lap time due to an electronic fault with his Alfa Romeo.

There had been speculation throughout Friday that Leclerc would opt to take on new engine parts that would see him relegated on Sunday’s grid, but it was only after P2 that Ferrari finally confirmed they would do so.

It is the use of a third control electronics unit that has triggered the 10-place penalty, but speculation remains Leclerc could take on further new parts that will see him relegated all the way to the back of the grid.

Ferrari’s engine struggles, which saw both cars retire last weekend at the Azerbaijan GP, only add to the ominous nature of Verstappen’s display on Friday.

The Dutchman’s victory in Baku was his fourth in the last five races and extended his world championship lead to 21 points, and with Leclerc hampered, the only threat to his hopes of sealing pole position on Saturday would appear to be the forecast of more rain in Montreal.

Friday’s sessions were the sport’s first since the FIA issued a technical directive in an attempt to combat the severe bouncing of cars that has occurred this season under the all-new design regulations for 2022.

The announcement of that directive was heavily influenced by Hamilton’s struggles in Baku, with the bouncing Mercedes leaving the Brit in such severe pain that he needed helping from his car at the end of the race.

It was emotional support Hamilton appeared to need after an eighth-placed finish in P1 and 13th in P2 left him despondent.

“It was pretty much like every Friday for us,” said Hamilton, who is 88 points adrift of Verstappen in the world championship standings. “We were trying lots of different things, an experimental floor on my side which didn’t work.

“Nothing we do to this car generally seems to work. We are trying different set-ups, me and George went with much different set-ups in this P2 just to see if one way works and one way doesn’t.

“I’ll wait to hear how it felt for him, but for me it was a disaster. It’s like the car is getting worse, it’s getting more and more unhappy the more we do to it.”