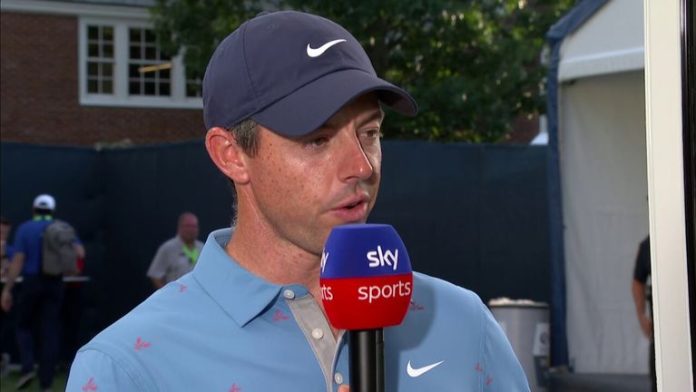 Rory McIlroy and defending champion Jon Rahm in the group tied-second on four under, with Collin Morikawa posting a second-round 66 to share lead with Joel Dahmen in Brookline; Watch day three of the US Open live on Saturday from 4pm on Sky Sports Golf

Rory McIlroy said he “couldn’t be happier” after a one-under 69 on the second day of the US Open had him one shot off the lead at four under par heading into the weekend at The Country Club in Brookline.

McIlroy overcame a sizeable hiccup on the third hole, where he took three shots to get out of the heavy rough on the right of the green, though once he did he then holed a huge 20-foot putt to limit the damage to a double bogey.

He would birdie two of his next five holes, only for a bogey on the 10th to drop him back to two over for the day, but a hot finish saw the Northern Irishman shoot in the 60s again and kept him firmly in contention for a fifth major title.

“After 36 holes in a major championship, all you want to do is put yourself right in the mix going into the weekend,” McIlroy told reporters.

“For a little part of the day there, it seemed like I was going to be a few more behind, but I dug deep and played the last eight holes really, really well.

“That was the goal. After I bogeyed 10, I just wanted to try to shoot under par. I had some chances coming up.

“I just played a really clean eight holes, which was pleasing. Hit fairways, hit greens, gave myself chances, got myself right back in the tournament.

“I was trying to make birdie on 18 to try to get to five under, but I’m really happy with my position.

“I played a good round of golf yesterday. I came back well today after a tough start, and yeah, right in the mix. Couldn’t be any happier.”

Will history repeat itself with Morikawa at US Open?

McIlroy is one shot off joint leaders Collin Morikawa and Joel Dahmen at five under, and Morikawa is hoping history can repeat itself and he can follow successive rounds in the 60s with a third major victory at the US Open.

Asked if he believed in destiny after his two previous wins, at the PGA Championship in 2020 and The Open last year, came in such circumstances, Morikawa joked: “It’s such a terrible stat.

“I mean, I’ve played 11 majors, so it’s not a big enough stat to really make anything out of it, but I would love to make it three for three.

“No one has taken it deep so far and kind of run away, but you know what, right now my game feels really good.

“The last few days is a huge confidence booster for me heading into this weekend, and hopefully we can kind of make some separation somehow.”

Rahm relishing challenge against the best in golf

US Open defending champion Jon Rahm is also among the group one back from Morikawa and Dahmen at four under and said he is relishing the prospect of going up against the biggest names in golf over the weekend, including world No 1 Scottie Scheffler in contention at three under.

“Oh, it’s great,” Rahm said post-round. “I think it’s a testament to the health and the state of this game.

“It’s pretty amazing to see Rory back – it’s not like he ever went anywhere, but playing back-to-back weeks and playing at the level he can.

“It’s fun for all of us because we all want to compete against the best and beat the best, and it’s obviously a lot more fun for watching people.

“I think it’s great for the game of golf that the highest ranked players and the best players are up there, especially in the tournament where truly the best player ends up winning.”

Watch the 122nd US Open throughout the week live on Sky Sports. Live coverage continues on Saturday from 4pm on Sky Sports Golf and Sky Sports Main Event.