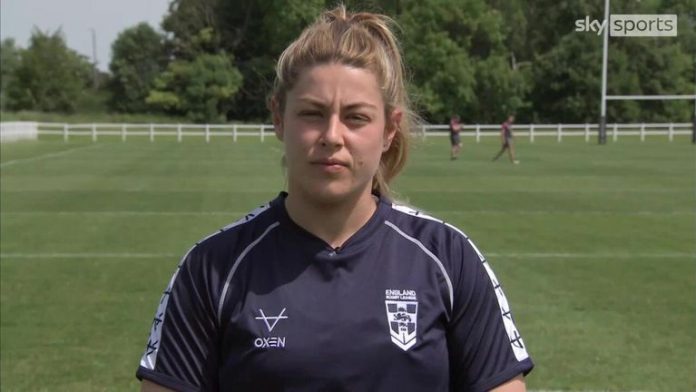 England Women face France and England’s men tackle the Combined Nations All Stars at the Halliwell Jones Stadium on Saturday; watch both matches of the international double-header in Warrington live on Sky Sports Arena from 3pm

We look at what is being said and team news as the England women and men’s teams take to the stage for Saturday’s international double-header, live on Sky Sports…

The Rugby League World Cup is not far over the horizon, but England Women head coach Craig Richards still has plenty to ponder ahead of the point where he has to name his squad for the tournament.

Richards is still giving new players an opportunity, with the uncapped trio of Keara Bennett, Courtney Winfield-Hill and Zoe Hornby all in contention to face France along with their recalled Leeds Rhinos clubmate Caitlin Beevers.

England captain Emily Rudge is excited by the competition being generated in the squad as players vie to be part of the World Cup on home soil in October and November and is impressed how the quality of players has grown in recent years.

“The depth now in the women’s game is more so than I’ve ever felt it, to the point where previously I could tell you who was going to be starting probably six months before the World Cup,” Rudge told Sky Sports.

“Now, I can’t even tell you who is going to be starting for the France game, for the World Cup games, it’s all very much dependent on who is on form at that time.

“There are a lot of players fighting for those positions and it does make it really exciting and competitive in training, which is brilliant.”

England and France met in another double-header in Perpignan last October, with the visitors triumphing 40-4 and second row Rudge leading the way for them with two tries.

The scoreline perhaps did not show how much of a test the French provided that day though and Rudge expects Saturday’s encounter in Warrington to be of similar intensity.

“When we played France last year, we found them to be a really physical, dominant side and that’s something we really thrived off,” Rudge said.

“I’m definitely expecting more of the same of that and I’m sure they’ll be buzzing after last time they played us, thinking they’ve got a good chance. That should set up for a good game and hopefully make it really competitive.”

It is just under four months until England’s men open the Rugby League World Cup against Samoa at Newcastle’s St James’ Park and head coach Shaun Wane knows the hosts will be in for a thorough examination against them.

With limited opportunities to see his team in match action before then, Wane is clear about how vital it is those games they do play are as close to Test-match intensity as possible and he expects the clash with the Combined Nations to be just that.

Indeed, if last year’s 26-24 defeat to the All Stars – drawn from the ranks of non-English players in the Betfred Super League as well as the likes of Daryl Clark and Kruise Leaming who are aiming to force their way into Wane’s thoughts – is anything to go by then the England head coach will get his wish as he seeks to make amends for the 2021 loss.

“I looked at the GPS stats last year and it was like Test level,” Wane said. “It was very aggressive, and I think this one will be the same.

“I played it down after the game about losing, but it still destroyed me losing that game and I want to put it right.

“I want to win this game, but I want a real, intense contest and having some of our players who are not going to play for us playing for them will make it a really good contest.”

Along with Clark, who is also eligible to represent Scotland, and Eswatini-born Leeming, the All Stars have an array of Australians, New Zealanders and Pacific Islanders aiming to once again dazzle in Warrington, while their coach is none other than rugby league great Ellery Hanley.

The concept of a Combined Nations team stretches back to the sport’s first international match in 1904 when an Other Nationalities team faced England in Wigan, while Hanley has experience of playing against a Rest of the World XIII for Great Britain in 1988.

The memories of playing against a team comprised of the best players in the world outside of these shores are still fond ones for Hanley and he is in no doubt his All Stars have fully embraced this concept as well.

“It was brilliant,” Hanley said. “We learned some very good lessons and I learnt a lot as an individual player, to be so grateful for playing with so many wonderful players I was able to rub shoulders with and play with for 80 minutes as well.

“I can tell you this: England are hurting from that loss and the job is going to be much harder this week.”