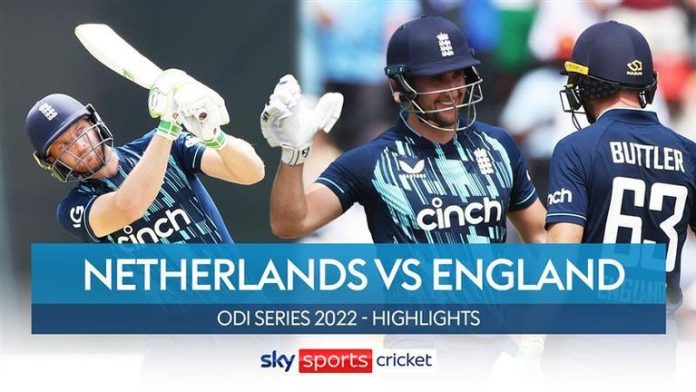 Watch England’s second ODI in the Netherlands live on Sky Sports Cricket from 9.50am on Sunday – Jos Buttler starred as England smashed world-record 498-4 in series opener and wicketkeeper-batter says team will keep targeting 500

Jos Buttler says England will continue to target the score of 500 in one-day international cricket after falling just two runs short of that mark during a devastating performance against the Netherlands.

After breaking their own previous ODI world-record score of 481-6, set against Australia at Trent Bridge in 2018, England were on 488-4 with two balls remaining against the Dutch in Friday’s series opener.

However, their hopes of reaching 500 were dashed with Liam Livingstone (66no off 22) only able to hit Shane Snater’s next delivery for four before he closed out the innings with his side’s 26th six, another record.

England’s stunning total of 498-4 was headlined by Buttler’s 162 not out from just 70 balls, during which he clubbed 14 sixes, struck his country’s second-fastest ODI hundred (47 balls) and blasted the second-quickest 150 (65 balls) by any player, behind only AB De Villiers’ 64-ball effort for South Africa against West Indies in 2015.

England may get another chance to push for 500 when the three-match series against the Netherlands continues on Sunday, live on Sky Sports Cricket from 9.50am and on Sky Sports Main Event from 10am.

Buttler said: “We’ve come close [to 500] one time before this and the message in the team is to try to keep pushing boundaries and taking the team forward, to take the game on.

“Is it a matter of time before we make 500? I don’t know. We’ll keep trying to do it. It’s a tough thing to try to achieve and it will probably have to happen on a belting wicket at a small ground.

“I think the biggest thing, irrelevant of the score, is the mentality we are showing as a team. We keep trying to better that and be better as a team when we play. We know that stands us in good stead.”

England went on to win the ODI opener by 232 runs after dismissing Netherlands for 266 in 49.4 overs, giving new white-ball head coach Matthew Mott a victorious start to his tenure.

Buttler, whose hundred was his 10th for England in ODI cricket, added: “Obviously any time you manage to play like that as a team is fantastic.

“I’ve said many times that this is the most fun environment I’ve ever played in, so it’s great to be back, great to be on a normal tour and not worry about bubbles and that kind of thing.”

Buttler continued his form from the IPL where he was the competition’s top run-scorer, amassing 863 runs for Rajasthan Royals, and also matched Virat Kohli’s record of four centuries in a single season.

Speaking after Friday’s match, England captain Eoin Morgan said of Buttler: “Jos played in a world of his own, like he has been over the last year or two.

“It’s incredible to watch and not something we ever get sick of or take for granted. It really is amazing cricket. It’s the reason he probably is the best white-ball cricketer in the world at the moment.”

England’s Friday run-fest – what records did they shatter or come close to?

– It was also the highest-ever List A total, beating Surrey’s 496-4 against Gloucestershire at The Kia Oval in 2007

– Jos Buttler’s 47-ball century was the second quickest for England in ODI cricket – one ball shy of his own record, set against Pakistan in Dubai in 2015

– England had three centurions in an ODI innings for the first time, with Buttler, Malan and Salt reaching three figures

– The only other side to achieve that is South Africa, who had Hashim Amla, Rilee Rossouw and AB de Villiers hit hundreds against West Indies in Johannesburg in January 2015, before De Villiers, Quinton de Kock and Faf du Plessis did likewise against India in Mumbai in October 2015.

Watch the second one-day international between Netherlands and England live on Sky Sports Cricket from 9.50am on Sunday.