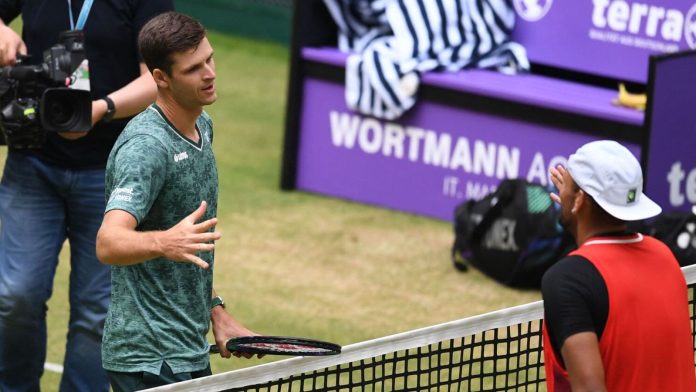 The big-serving Polish player hit 27 aces against 30 for Kyrgios, who lost despite holding in every one of his service games.

Hurkacz’s win sets up a clash with top-ranked Daniil Medvedev, who beat Oscar Otte 7-6 (3), 6-3 to advance to a second straight grass-court final after he was runner-up at ‘s-Hertogenbosch.

Hurkacz and Medvedev have each won two of their four matches together, though Hurkacz was the winner of their only meeting on grass in the fourth round of Wimbledon last year and also won the most recent match in Miami in March.

Big-serving Berrettini moved one step closer to defending his Queen’s Club crown, rolling over the world number 29 from Holland 6-4 6-3 in 90 minutes to reach the final, and he even received a marriage proposal into the bargain following the straight-sets win.

The Italian was then propositioned by an admirer in the stands and said, smiling: “Let me think about it.”

He has won his last eight matches on grass and has now become only the fourth man to reach four consecutive finals on the surface, along with Murray, Roger Federer and Novak Djokovic.

“I didn’t know that,” he said. “It feels nice. Obviously I can’t compare myself to those three players, they made history in our sport but I’m trying to learn from them and hopefully one day I’m going to beat them.”

On this form, Berrettini will be a major threat at SW19 once again.

The 26-year-old from Rome dropped his serve for only the fourth time this week as Van De Zandschulp hauled back an early break to trail 4-5.

But the underdog, who at one point voiced his frustration at the noise coming from the chattering classes in front of the clubhouse, was undone by a pair of Berrettini volleys as the second seed wrapped up the first set.

Van De Zandschulp’s mood did not improve as a rain delay arrived midway through the second set with him facing a break point, the 26-year-old Dutchman arguing in vain the game should not have started as it was already raining.

Almost inevitably upon the resumption he lost the point, sending a forehand long and shrugging in exasperation as the match slipped away.

“It was windy again today but I think I played my best match of the week and I’m really looking forward to the final.

“I guess this is the UK. Yesterday felt like Italy, today is more London weather. But we have to adjust to everything. I was ready when I had to be ready.”

Cilic seemed to struggle in the breezy, chilly conditions which were in stark contrast to Friday’s sweltering heat.

Amazingly, Krajinovic had never won an ATP Tour match on grass before he arrived in west London this week.

“To be honest I don’t like to play on grass, every year I find a way to skip the tournaments, just coming to Wimbledon and losing in the first round.

“But maybe it will change and I’ll start to like it. I have nothing to lose and I’m going to enjoy it.”

Meanwhile, there was disappointment for Britain’s Alfie Hewett in the wheelchair event, as he was beaten by Belgium’s Joachim Gerard 6-7(6) 6-2 6-2 in a thrilling match on Court 5.

Gerard said: “It was a tough match.

“He didn’t serve so well today and that gave me chances, but I am also happy with the way I played. Playing Alfie in Britain always gives the rest of us extra motivation and this was a good win for me today.

“Grass is always a tough surface for wheelchair players, but I am happy with this result.”

Coco Gauff’s best run yet in a grass-court tournament came to an end when the 18-year-old American lost to Ons Jabeur 7-6 (4), 6-2 in the semi-finals of the Berlin Open.

Cheered on by fans waving Tunisian flags amid a heatwave in Berlin, Jabeur recovered from 3-1 down in the first set and dominated the second to set up a final against Belinda Bencic on Sunday.

“You have to be this good to beat Coco, you know. She’s a great player,” Jabeur said.

She added she had no expectations of her first grass tournament of the season and paid tribute to the Tunisian fans: “Everywhere I go they’re always here, they’re chanting all the time, it’s amazing,” she added.

Jabeur will play her fourth final in a season where she has reached a career-high ranking of fourth in the world and became the first African and first Arab player to win a WTA 1000 event at last month’s Madrid Open.

The tournament in Berlin is her first since a surprise first-round loss at the French Open.

Next week, Jabeur is heading to Eastbourne, where she will team up with Serena Williams in doubles on the American’s return after a year out.

Meanwhile, Bencic is back in the Berlin final for the second straight year in her quest for a first grass-court title in seven years after a hard-fought win over Maria Sakkari.