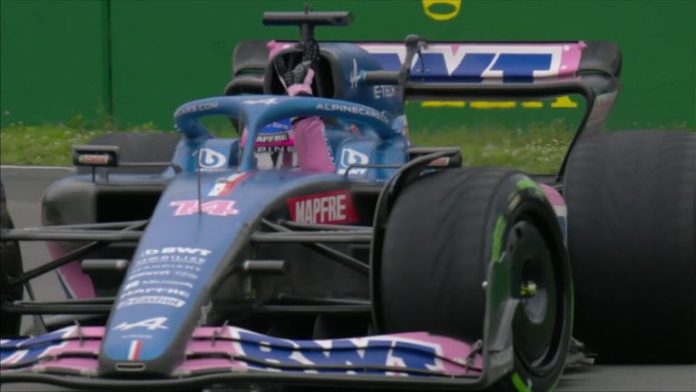 Max Verstappen cheekily describes Alonso as “a little bit old” after the Spaniard enjoys his best qualifying session in more than 10 years; watch the Canadian GP live on Sky Sports F1 from 5.30pm on Sunday, with lights out at 7pm

Fernando Alonso vowed to attack pole-sitter Max Verstappen from the start of Sunday’s Canadian Grand Prix after sensationally putting his Alpine on the front row in qualifying.

The 40-year-old former world champion mastered the wet conditions during Saturday’s qualifying session to finish just 0.645 seconds behind Verstappen, prompting a raucous reaction from his team and the crowd at the Circuit Gilles Villeneuve.

“I’ll attack Max on the first corner,” he said – with a wink – after securing his first front-row start since the German Grand Prix of 2012.

“The car was mega. I was so comfortable with driving this car and I think the fans also helped me to make an extra push.”

Verstappen cheekily responded to Alonso’s threat in the post-qualifying news conference by describing the Spaniard as “a little bit old” while also paying tribute to a legend of F1.

“It’s been a while,” said the current world champion. “I used to look at F1 when I was a little kid and see Fernando being up there winning races and championships and putting it on pole. To be sharing the front row is a nice thing.

“Of course Fernando is getting a little bit old, but he is still very fast. I know he starts very well, so I have to be ready.”

Alonso responded by repeating his plan to pass him at the start – although he admitted he was confused by the procedures after qualifying in the top three, not realising he needed to do a press conference and not having the a cap ready for his media duties.

He also admitted he benefitted from the unusual qualifying conditions in Canada and still expects to be challenged by Carlos Sainz (starting third), Sergio Perez (starting 13th) and Charles Leclerc, who starts at the back following an engine penalty.

“It was an amazing day for us,” he told Sky Sports.

“Starting on the first row is better than expected and it’s a much better result than we were hoping for, but we’ll take it.

“It was a very tricky qualifying, semi-dry but still on inters, and I think we benefitted from those conditions.

“I’m not sure we have the car to qualify in that position but today we were lucky with the circumstances. We are working a lot to make the car as fast as possible.

“We brought new side pods to Baku and new parts here to the rear wing. This kind of result helps everyone in the factory to keep working.

“Let’s see tomorrow. I think our natural position is always behind the top four. It doesn’t matter where they start or if they have a puncture or whatever in lap one, they still manage to finish in front of everybody.

“I expect to be fighting and aiming for top five, but that’s taking into account we can beat the Mercedes, another very fast car.

“It’s still a long race to go and difficult to execute with the tyre management. I’m confident, but we cannot dream too big.”

Alpine team boss Otmar Szahnauer backed his man to take the fight to Verstappen in the first corner as he paid tribute to the Spaniard’s adaptability.

“For sure Fernando’s experience and skill showed through today and he put it on the front row,” he told Sky Sports.

“He’s always been really, really good at adapting very quickly so he’s always on the pace very quickly. When you have changeable conditions, that ability to adapt quickly shines through.

“It just shows that sometimes experience plays a bigger factor than the exuberance of youth. The older we get, the more we like to say that.”

‘I’m hoping for a good game….GOAL!’ | Ambrose reacts to Leeds goal within seconds

2 children died, 6 others injured after bus crashes into daycare near...