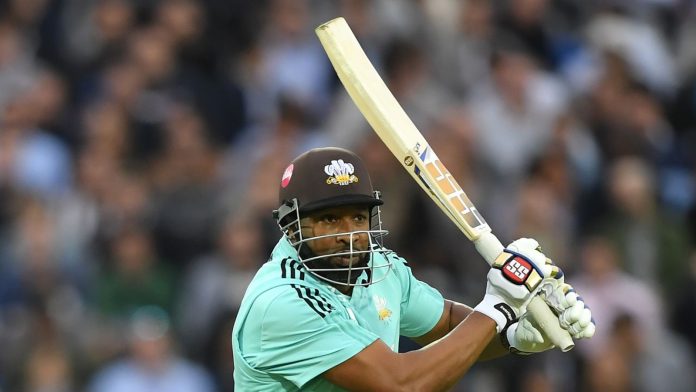 Surrey secured a four-wicket Vitality Blast victory over Hampshire to maintain their unbeaten start to the season; Steven Croft hit an unbeaten 61 as Lancashire put one foot in the quarter-finals at Notts Outlaws’ expense; Middlesex ended their six-match losing streak by beating Kent

Kieron Pollard bashed 34 as Surrey secured a four-wicket Vitality Blast victory over Hampshire Hawks to maintain their unbeaten start to the season.

Trinidadian Pollard had previously been restricted to short cameos, with a top score of 23, in his first five matches for Surrey.

But after Jamie Smith and Laurie Evans had put a modest chase of 152 in order, the West Indian clubbed two sixes and three fours off 22 balls to keep Surrey glued to the top of the South Group.

Hampshire, who had James Fuller smash a late unbeaten 39 and saw Liam Dawson take two for 21, end their five-match winning streak but remain in the quarter-final hunt.

Lancashire put one foot in the quarter-finals

Steven Croft delighted a sell-out crowd at his home club of Blackpool with an excellent unbeaten 61 as Lancashire put one foot in the Vitality Blast quarter-finals at Notts Outlaws’ expense.

Croft was born in the seaside town and is much loved at Stanley Park, where 4,500 packed in to watch the Lightning claim a seventh win in 10 games by chasing 180 for the loss of four wickets with 10 balls remaining to return to the North Group’s summit.

If the popular opinion that seven wins will qualify you for the quarter-finals rings true this year, the Red Rose are there following Croft’s third-wicket partnership of 114 with current skipper Dane Vilas, who made 55 off 30 to advance from 31 for two.

Nottinghamshire’s 179 for seven included Samit Patel’s 45 off 36 balls and captain Dan Christian’s unbeaten 30 off 14, with two leg-side sixes off the last two balls of the innings from Danny Lamb.

Cracknell, with an unbeaten 43 from 37 balls, and Simpson (46 from 35) shared the only sizeable stand of a low-scoring game to set up Middlesex’s triumph with 15 deliveries to spare.

Defending champions Kent, who languish at the foot of the table, limped to 141 for nine after opting to bat, stifled during the middle overs by Middlesex’s spin trio of Chris Green, Thilan Walallawita and Luke Hollman.

Although the Spitfires gained a glimmer of hope with two wickets in quick succession, the third-wicket pair batted sensibly to extinguish that and keep Middlesex’s faint hopes of qualification alive.

Rilee Rossouw surged to the top of the Vitality Blast run-scoring charts as Somerset stayed on course for a home knockout tie with an eight-wicket thrashing of Essex at Chelmsford.

Rossouw plundered 85 not out off just 36 balls to move ahead of Northamptonshire’s Chris Lynn in the standings as the visitors made light work of chasing down 189 to win, although the Eagles were left to rue giving the South African a life, spilling a regulation chance when he had made just four.

Somerset skipper Tom Abell provided great support with an unbeaten 62 as the visitors romped home with 15 balls to spare.

That came after Michael Pepper (86 not out) and Paul Walter (58) had helped Essex push on in their innings to record a total of 188 for five.

Rehan Ahmed notched career-best figures as the Leicestershire Foxes gave their Vitality Blast campaign a vital boost with a 51-run win over Durham in their clash at Seat Unique Riverside.

Wiaan Mulder was the key man with the bat for the Foxes, scoring 54 from 33 balls after the visitors appeared to be in danger at 80 for six.

The South Africa international timed the ball to perfection with four boundaries and two sixes to elevate his team to a defendable total of 157 for nine from their 20 overs.

Durham struggled throughout their chase and were always behind the rate, increasing the pressure in the middle.

Ahmed tormented the home side with wrist-spin on a slow surface with figures of four for 22, while Callum Parkinson (three for 16) and Mulder (two for 16) were also on point to bowl their side to a victory that keeps the Foxes’ hopes alive in the North Group.

The Falcons secured their fourth successive victory as they comfortably beat a Bears side that had piled up a Blast record total against Nottinghamshire Outlaws only two days earlier.

This time the Bears were restricted to 159 for seven by excellent bowling led by Sam Conners (three for 25) and Mattie McKiernan (two for 18). Sam Hain continued his sublime form with an unbeaten 73 (40 balls) but no other batter escaped the shackles.

The visitors made light of the modest target, racing to 160 for three with 11 balls to spare.

The win lifts the Falcons into the qualification spots while the Bears are also still there but remain hit and miss, their record total of 261 on Friday sandwiched between defeats by 10 and seven wickets.

Another concern for them was Hain’s absence when fielding due to a sore back.

Glamorgan back to winning ways

Glamorgan got back to winning ways in the Vitality Blast with a four-wicket victory over Sussex in Cardiff.

Wickets for the ever-reliable Michael Neser and runs from Colin Ingram and Sam Northeast set up the Glamorgan victory that keeps their knockout hopes alive.

Sussex batted first and a stop-start innings saw them set Glamorgan a target of 150 to win with Luke Wright top scoring with 46.

A big partnership between Ingram and Northeast was the foundation on which the successful chase was built, with the former the major contributor with 57 from 43 deliveries.

Late wickets, including those of Ingram and Northeast, brought Sussex back into the contest at the death but the big-hitting Dan Douthwaite saw the hosts home with an over to spare.