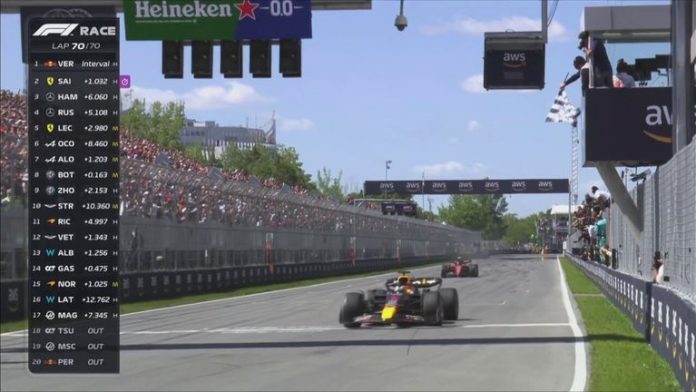 Max Verstappen held off Carlos Sainz in a thrilling battle to claim the first Canadian GP victory of his career in an action-packed race in Montreal.

A late Safety Car at the Circuit Gilles Villeneuve set up a gripping finale, but Verstappen superbly defended the Ferrari of Sainz – despite having older tyres on his Red Bull – to extend his world championship lead to 46 points.

Lewis Hamilton managed to find some pace – in a Mercedes he described as “undriveable” on Friday – to claim a first podium since the opening race of the season, while his team-mate George Russell followed in fourth.

Charles Leclerc recovered to finish fifth in the other Ferrari after starting on the back row having taken a new power unit for the race, while Sergio Perez’s hopes of challenging his Red Bull team-mate for the world championship suffered a major blow as an early gearbox failure ended a terrible weekend for the Mexican after he crashed out of qualifying on Saturday.

While Verstappen was always likely to extend his championship lead with his nearest challengers starting so far down the grid, his maturity and composure in denying Sainz a maiden F1 victory was an ominous showing in terms of his rapidly strengthening title defence.

The Dutchman, who was driving in his 150th Grand Prix, has now won six of nine races this season, with two early-season retirements caused by reliability issues now seeming a distant memory.

Ferrari, aided by Sainz scoring an extra point for the fastest lap of the race, were at least able to narrowly reduce Red Bull’s advantage in the constructors’ championship to 76 points.

Fernando Alonso, who started second after a throwback performance in Saturday’s wet qualifying, finished seventh, a place behind team-mate Esteban Ocon, after Alpine made a strange strategy call in opting to delay pitting the Spaniard.

Valtteri Bottas was eighth for Alfa Romeo, while his rookie team-mate Zhou Guanyu claimed the highest finish of his debut F1 campaign in ninth, with Aston Martin’s Lance Stroll rounding out the top 10 at his home race.